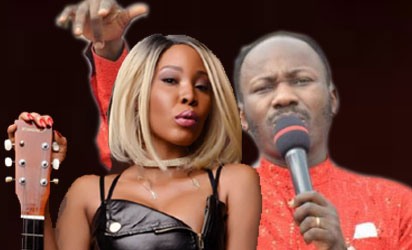 Again Stephanie Otobo is back in the news, years after she exposed her alleged sexual affair with Apostle Johnson Suleman.

The music artiste also posted screenshots of video calls and another intimate image.

She dared the “Oracle of God” to deny he is not the one in the photos.

“Can you deny this? Your fingernail and the scar on your left thigh?

“If these screenshots were fake, how did I get his pics that aren’t public pics and how come I’m the first to release this kind of pics of him?”

Stephanie said Suleman has changed his hairstyle twice since she came out to speak up with receipts.

“What is he gonna say about the scar on his left thigh? His wife can’t deny that scar. How did I know if we didn’t have intimacy?”.

The musician added that Suleman has been accusing pastors and politicians of trying to bring him down but failed to name them.

She claimed the pastor “has done everything to end my life but God is not dead”.

“I’ll release a comprehensive video of everything that happened and the answers to questions.”

No Friction Between Former President Goodluck Jonathan and Governor Wike