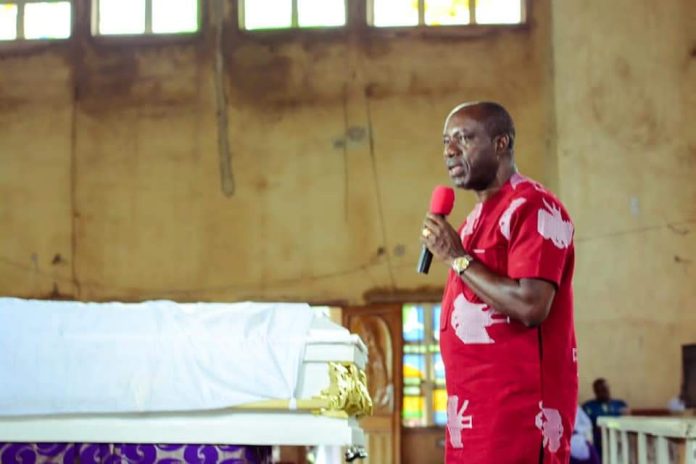 Governor Chukwuma Soludo has paid his last respects to the late Mr Cyril Chiegboka who was killed alongside his boss, the former Lawmaker that represented Aguata Two Constituency in Anambra State House of Assembly, Dr Okechukwu Okoye last month.

Until his death, the late Mr Chiegboka was Campaign Director to the deceased lawmaker.

Their bodies were found on May 15 after they were kidnapped by gunmen.

The mass held in honour of the Late Chiegboka took place at St Paul’s Outstation, Isuofia and was celebrated by the Catholic Bishop of Ekwulobia, Most Reverend Peter Okpalaeke.

The mood at the Church was evidently of sadness for family, friends, well wishers, Isuofia Community and government of Anambra State.

Condoling with the family and the entire Isuofia Community, Governor Soludo revealed that four persons suspected to be to be part of those murdered the Lawmaker and his aide are already in custody.

The Governor who stated that the lasting criminality in the state is a contest between light and darkness, also revealed that the criminal elements are sworn to gods who demand blood sacrifices.

Earlier in a homily, Bishop Okpalaeke declared that God will judge the perpetrators by himself as God is alive despite the situations.

Bishop Okpalaeke described the Late Chiegboka as a man who was committed to many causes that advance humanity, calling on people to endeavour to get involved in things that will benefit God and society.

We We Killed Leo – Ex-Soldier Confesses in Owerri