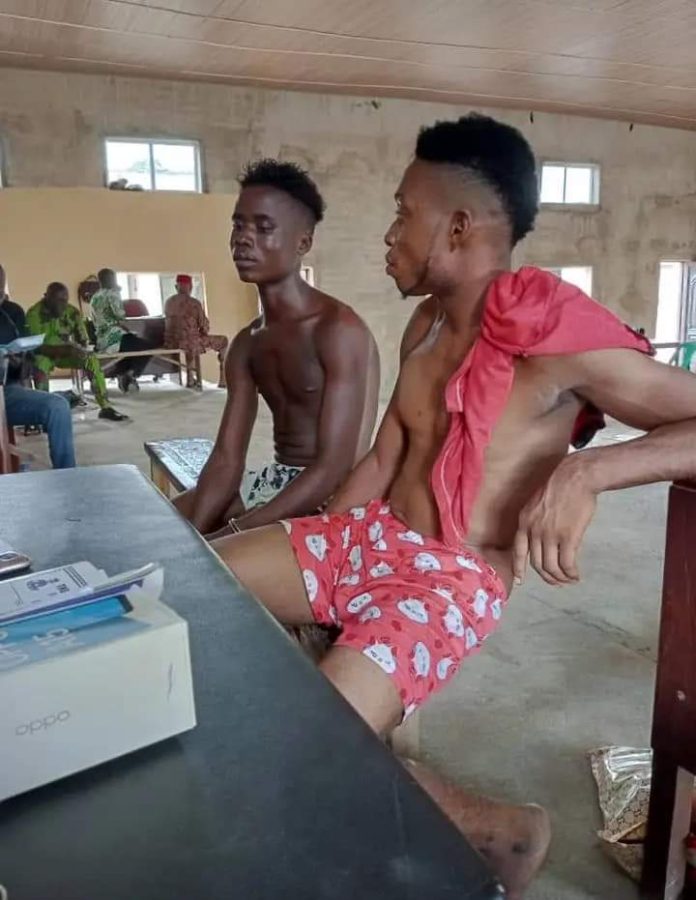 Nemesis has finally caught up with two young men as Abia State Police Command has paraded them as suspects involved in the gruesome murder of a young Lady and a nursing mother, of an 11 months old baby boy and took away the baby which they allegedly sold and got N150, 000 naira reward.

The lady, Chihurumnaya Udeh, a native of Edda, Ebonyi State but resident at No. 125 Umunkama Road by St. Dominic Ngwa Road, Aba had her life cut down by the two young boys after luring her to a hotel in Ogbor Hill area of the commercial nerve centre of Abia state

Addressing newsmen on Monday in her office at the Police Command Headquarters, Umuahia, the Abia Commissioner of Police, CP Janet Agbede, said the incident occurred at Merry Home Hotels, Aba on April 15, 2022.

According to her, she said on the said day, two suspects Chimaobi Anyim Kalu 25, of No. 44 Nwogu Street Ngwa Road Aba, and David Ogwo Orji 21, resident at Umukanma Roundabout, Ngwa Road, connived and killed Chihurumnaya Udeh while her baby boy of about 11 months was taking away by the suspects.

CP Agbede, revealed that on discovering the misnomer, the proprietor of Merry Home Hotels, Ogbor Hill, Aba, Felix Abengowe, reported to the Police that the corpse of an unidentified female with a sharp cut on her neck was found in one of the hotel rooms, a report that madet the Police swing into action.

On arrival at the scene of the heinous crime, it was discovered that the suspects escaped with the deceased’s baby boy after murdering the mother.

The Commissioner of Police said the suspects were arrested between May 15th and 16th, 2022 upon credible information and upon their arrest, it was discovered that both suspects are motorcycle riders, popularity called “Okada” and both hails from Ugwueke in Bende LGA of Abia State.

She revealed that in their confessional statements, the suspects admitted to administering drug which was a mixture of yoghurt , which was spiked with 8 tablets of piriton tablets on their victim. After taking the yoghurt, she became dizzy, unconscious and slept off, before stabbing her on the neck with broken glass cup which led to instant death as they equally confessed to selling the baby for the Sum of one hundred and fifty thousand naira (N150, 000) only, which was shared equally by both suspects

The CP, Abia state Command equally told newsmen that plans are underway to arrest other fleeing suspects, a man and a lady, that could lead to the recovering of the 11 months Chimereobioma Silver who was purportedly sold .

The Abia state Commissioner for Police, Janet Agbede used the opportunity to harp on the need for security consciousness around hotels, schools, churches, residential areas, business premises, recreation centers as well as when driving or on transit.

In their confessional statements to newsmen, Chimaobi Anyim Kalu Nwogu and David Ogwo Orji, acceded to killing Chihurumnaya Udeh while also admitting to selling her baby for the sum of N150, 000.

Interacting with newsmen shortly, the parents’ of the deceased, Mr and Mrs John Udeh from Edda in Ebonyi State who could not hold their tears, called for justice to be meted to the suspects.

In his reaction, the Director of Merry Homes Hotel, Mr. Felix Abengowe, regretted the sad incident at the hotel, which he described as the first shocking experience of the establishment and thanked the Abia state Government and Abia state police command for their proactive response that led to the arrests of the suspects.

He said the security measures put in place at the hotel assisted in the arrest of the wicked and heartless suspects.

Mr. Abengowe dismissed as unfounded and malicious falsehood, the story published by a conventional newspaper, allegging that the hotel was a ” Den of Criminals” and assured that the hotel has engaged a Legal team to challenge the newspaper house.

He consoled the family of Late Ms Chihurumnanya Udeh for the sad loss of their daughter and stolen grandson and urged the Abia state police command to make sure that justice is served and insist that the wicked murders should not go unpunished by the long arms of the law.

Two Fraudsters Wind up in Jail