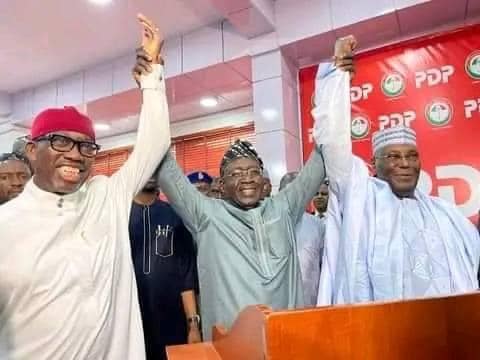 On Thursday aggrieved members of the People Democratic Party (PDP) have been urged to accept the emergence of Atiku Abubakar and Governor Ifeanyi Okowa of Delta State as presidential and vice-presidential candidates.

Chief Jackson Ude, chieftain of PDP, gave the advice in a statement in Lagos, urging the aggrieved members to sheath their swords and accept their emergence as an act of God.

He urged Governor Samuel Ortom of Benue State and former Ekiti Governor, Ayo Fayose, to accept the outcome of the process that produced Atiku and Okowa as the party’s standard bearers.

Ude said, ”The special convention to pick the presidential candidate of the PDP has come and gone. Those who lost out should accept defeat with maturity.

“Atiku Abubakar who defeated others to clinch the presidential ticket of our great party is going to be magnanimous in his victory.

”He’s a true leader who understands how it feels to lose. He’s going to reach out to all. His victory isn’t his alone.

“It’s the collective victory of those who contested and lost, those who wished to contest, those who did not contest and all the members of the party, including Nigerians who are yearning for his leadership.

“I urge Gov. Samuel Ortom to please accept the verdicts at the convention and the choice of Governor Ifeanyi Okowa as VP. My beloved leader, former Gov. Ayo Fayose should also please accept all that has happened.

”As Christians, they should accept these outcomes as God’s wish. Only God gives victory. God knows why He handed the ticket to Atiku and Okowa.

”The outcome of the convention and the events leading to the picking of Okowa as running mate are all God’s wishes. If not, Atiku would not have won the ticket and Okowa wouldn’t have been picked as VP.”

Ude added, ”No doubt Governor Nyesom Wike is a great leader of our party. His huge contributions to the party would surely not be overlooked. I am sure he’s top on the list of those who will play huge roles in salvaging Nigeria in Atiku Abubakar’s-led government in 2023.”

Recalls that the post-presidential primary crisis has engulfed the PDP.

On Wednesday, Ortom decried what he described as Atiku’s ‘insult’ to Rivers State Governor, Nyesom Wike.

According to him, Atiku should explain why he didn’t pick the former presidential aspirant as his running mate.

Also, Fayose insisted that power should shift to the South.

By 2025 Nigeria will be among world-leading economies – Dasuki

War: Reasons we didn’t inform Russia about new security changes in Europe – US