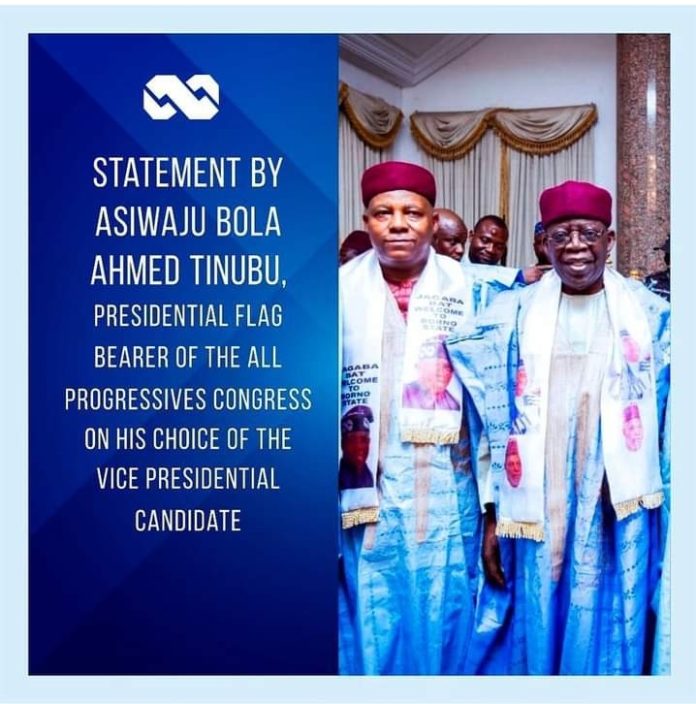 Alhaji Murtala Ajaka, All Progressives Congress (APC) Deputy National Publicity Secretary, has appealed to Nigerians to ignore religious sentiment being raised on the party’s choice of Sen. Kashim Shettima as its 2023 Vice-Presidential candidate.

Ajaka made the appeal in a statement on Monday in Abuja while reacting to sentiments being expressed by especially opposition political parties on APC’s choice of Shettima.

The News Agency of Nigeria (NAN) reports that Sen. Bola Tinubu, APC’s 2023 presidential candidate in Daura, Katsina State, announced Shettima, a Muslim and a former two-term Governor of Borno, as his running mate.

Tinubu, also a former two-term Governor of Lagos State and one of the leaders of the APC, had gone to Daura to pay Sallah homage on President Muhammadu Buhari.

Shettima is currently representing Borno Central in the National Assembly.

Ajaka, while commending Tinubu’s choice, said the fears being expressed in some quarters only existed in the imagination of opposition political parties.

The APC spokesman described Shettima as the best choice for the APC to win the forthcoming 2023 presidential election.

According to him, the opposition parties, especially the Peoples Democratic Party (PDP), had been thrown off balance since Shettima was announced as APC’s Vice-Presidential candidate, hence the noise and their agony.

Ajaka said Shettima was a man of knowledge, accomplishment, courage and integrity, who was not given to bigotry, or having corruption badges with any anti-corruption agencies.

He added that the sterling qualities of Shettima as APC’s Vice-Presidential candidate, had once again thrown the opposition parties off balance.

“The PDP and others would have preferred our presidential candidate to settle for the less to make it easy for them to win election.

“But the choice of the trusted and trust worthy Shettima must have disorganised their evil plans.

“While we sympathise with the opposition parties, we appeal to Nigerians, who will eventually be the beneficiaries of good governance under Tinubu-Shettima presidency, to see beyond the sentiments of religion and tribe.

“Both Asiwaju Bola Ahmed Tinubu and Sen. Kashim Shettima are not religious fundamentalists or ultra Muslims, their records in public offices are testimonies to rely on,” he said.

Ajaka recalled that as a two-term former governor of Borno, Shettima enjoyed the support of the Christian community throughout his tenure as testified by the state’s chapter of the Christian Association of Nigeria (CAN).

He added that there was no government in the history of Borno that had been fair to the christain community as much as that of Shettima.

He said Shettima as Governor of Borno, sponsored the highest number of Christian pilgrims yearly from 2011 till he left office.

“This and many other records of mutual respect for all faiths, are there to verify in Borno,” Ajaka said.

He, however, added that the APC and its presidential candidate would not be distracted from the goal of winning the 2023 general elections at all levels.

“Borno has the largest votes in the North-East where Kashim Shettima has been governor for eight years and now a Senator and still politically relevant.

“If APC had enjoyed massive support from this state and the entire North-East and the emergence of Shettima as our Vice-Presidential candidate will deny the candidate of the PDP a smooth ride in the zone.

“I think APC and our presidential candidate are politically correct because our main goal for now is to emerge victorious in the coming elections, not forgetting competence which Shettima represents,” he said.

We have uncovered a violent demonstration plan ,Says Abia Gov’t

Rivers, FIRS Back In Court Over Stay Of Execution Concerning VAT...