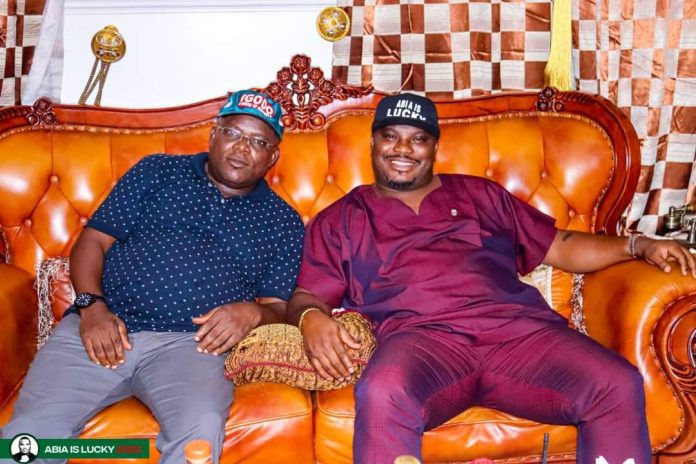 Former Peoples Democratic Party, PDP, governorship contender and the Youth Ambassador of the Prof Uche Ikonne Campaign Organization, H.E Mayor Lucky Igbokwe, aka, Don Lulu, has joined forces with Chief Erondu Erondu jnr, a close aide of Gov Okezie Ikpeazu to mobilize the Abia youths in support of the candidacy of Prof Uche Ikonne and other PDP Flagbearer in the forthcoming 2023 General Election.

Mayor Igbokwe who was on a scheduled visit to the Obingwa residence of Chief Erondu Erondu jnr, who also is the candidate of the PDP for Obingwa West state Constituency, announced his youth empowerment programmes for Abia youths and his plans to ensure that the youths were integrated into the making of the new Abia.

While receiving the United Nation Mayor of Peace, Hon Erondu jnr described Mayor Lucky Igbokwe as a true leader and worthy son of Abia State who has carved a niche for himself in the world of entertainment.

The PDP house of assembly candidate assured Mayor Igbokwe of his readiness to join forces with him to ensure the victory of not only Prof Ikonne, but all the other PDP contestants in the state.

He said that the visit by the Ohuhu Umuahia born entertainment expert and vibrant politician, has ushered in a new relationship and collaboration between them geared toward the development of Abia State.

Hon Erondu jnr who also applauded Mayor Igbokwe for his indomitable spirit of sportsmanship, as exemplified during the gubernatorial primaries,
said he has no doubt that Mayor Igbokwe would make a success of his political career.

Erondu jnr promised to return the visit in order to cement the new alliance.