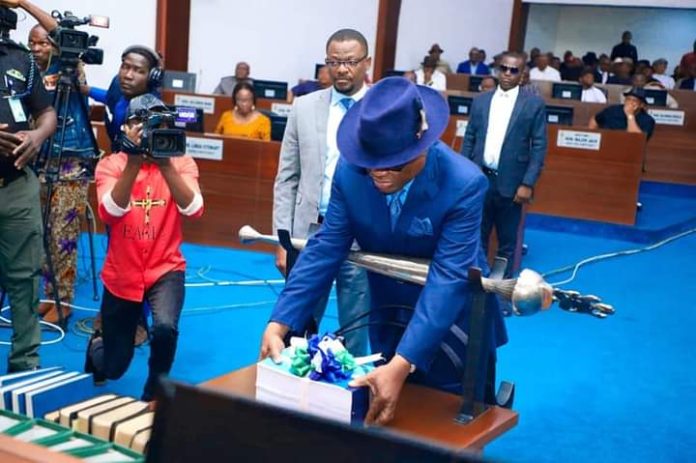 Rivers State governor, Nyesom Ezenwo Wike, has presented the 2023 Appropriation Bill to the State House of Assembly for consideration.

The governor, who christened the 2023 appropriation bill, ‘Budget of Consolidation and Continuity’ said it comprises capital and recurrent expenditure of N550, 666,987,238.00 for the fiscal year 2023.

Presenting the budget before State lawmakers on Tuesday in Port Harcourt, he explained that his administration has projected the sum of ₦350,977,495,537.00 as Capital Expenditure for the fiscal year 2023.

“This amount represents about 63.2% of the total budget and conforms to our practice of prioritising capital expenditures over recurrent.”

“Accordingly, the sum of N114,264,480,208 is provided in the 2023 capital budget estimate to fund the completion of all ongoing roads and other physical infrastructural projects awarded by our administration.”

In the 2023 budget proposal, governor Wike said his administration has also proposed a Recurrent Expenditure of N175,249,692,497à, representing about 31% of the total budget for the 2023 fiscal year.

He stated that while no new projects may be awarded, except where such is considered very significant, the administration shall galvanise efforts and resources to complete all ongoing projects so that the new government can start on a clean slate, unencumbered.

The governor said in 2021 and 2022, the State government introduced several fiscal measures, including a moratorium on external borrowing to achieve economic growth, fiscal discipline and financial consolidation.

These measures, according to him, have significantly blocked revenue leakages, improved the State capacity for internal revenue generation and prevented unsustainable deficit financing.

“We have, therefore, resolved to continue with the existing fiscal measures for the year 2023. This means that there would be no increase in tax rates. No new taxes will also be introduced.

“However, we will continue to intensify our drive to significantly improve IGR by expanding opportunities for more investments, industrialization and efficient tax collection.”

The governor disclosed that the State remains determined to reduce its dependence on statutory federal allocations to finance its budget and development. To this end, he urged other sister States to join Rivers in the struggle to secure the right to impose and collect VAT at the sub-national level.

“The shortfall in IGR is attributed to our inability to collect the projected proceeds from value-added tax following the stay of execution ordered by the Court of Appeal, which we have appealed to the Supreme Court.

“Furthermore, augmentation from the Federal Government accounts for the nominal increase recorded in the allocations from the Federation Account Allocation Committee (FAAC). In other words, the 2022 budget performance did not also meet projected receipts from FAAC.

“Nevertheless, the aggregate performance of the budget on the revenue side stood at over 90% at the end of October 2022.”

Governor Wike revealed that the sum of N5 billion has been proposed under Special Projects to introduce and fund a free feeding programme for pupils in State primary schools to increase and sustain enrolments and reduce poverty.

He said the State has further provided N4 billion under Special Projects to fund free medical care for nursing mothers and children for the fiscal year 2023.

The Rivers State governor said although this is the last lap of his tenure, the administration is resolved to continue to advance Rivers development and secure its future.

“We are therefore poised to use the 2023 budget to deliver more transformative infrastructure and other strategic projects and services and move our dear State closer to the point of self-sustainability.”

The Speaker, Rivers State House of Assembly, Rt. Hon. Ikuinyi-Owaji Ibani, noted that governor Wike has through prudent allocation of resources put in place a roadmap for the development of the State.

Ibani, who commended the governor for his achievements in the past seven years, noted that his numerous infrastructural projects will positively impact on the development of the State in future.

Nigerians need skills while we acquire the certificates – Ogah