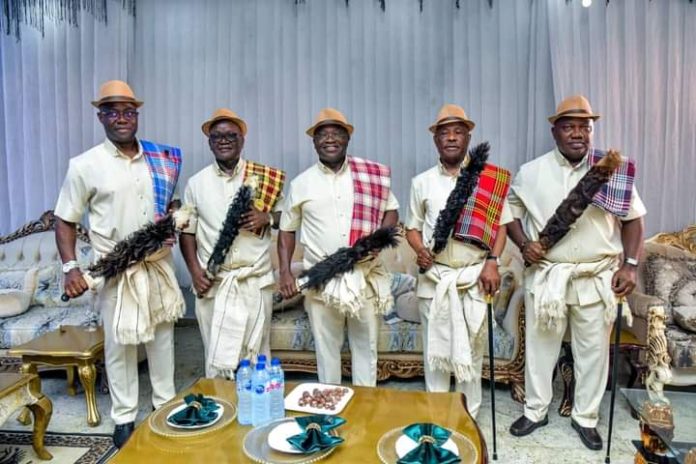 The five governors of the Peoples Democratic Party (PDP), known as the ‘Integrity Group’ have again in Abia State blamed some people that they called enemies of progress of frustrating the party’s chances of winning the 2023 presidential election.

On Wednesday’s night, the Rivers State governor, Nyesom Ezenwo Wike led the governors of Benue, Samuel Ortom, Ifeanyi Ugwuanyi (Enugu) and Seyi Makinde (Oyo) to Abia State ahead of the flag-off of campaign of the State’s chapter of the PDP.

They were received on arrival by Dr. Okezie Ikpeazu, Abia State Governor, who after the welcome formalities, organised a gala night event for them in his country home, Umuobiakwa.

He treated them to delectable rich cultural performances, music rendition, dances, and comedy. The Integrity Governors also had their session and danced.

Traditional Rulers of Obiakwa, led by the Chairman, Abia State Council of Traditional Rulers, HRM Eze Joseph Ndubuisi Nwabeke made special presentation to the five governors. Some of the items included traditional wrappers, warrior matchet plus prayers said on them.

Speaking on behalf of his colleagues, Dr. Samuel Ortom, reiterated that they are committed members of the PDP.

He stressed that as governors of States controlled by the PDP, they are working assiduously while deploying political strategies, to make sure that the party is delivered in their States during the 2023 election.

“We have teamed together to build this party to make it very strong and our intention was that we will take over governance in 2023 and build Nigeria again from bottom to top.”

Governor Ortom noted the enormous encouragement, support and leadership that governor Wike has provided the group in its battle against forces that are frustrating the PDP from winning the 2023 election.

He said, the five governors are men of integrity who believe in equity, fairness and justice will never succumb to any intimidation.

“One notable person that has made this party what it is, is governor Wike. Since he joined PDP, he has never left PDP.

“In 2015, when I was denied the ticket, l left, went to APC and grab the governor, came back to PDP, because PDP is home.

“So, we appreciate PDP. It is the platform we are working for in our various States. We are not going to be intimated. We appreciate the traditional rulers. You charged us not to be intimidated but stand for the truth. That is what we stand for.”

Governor Ortom expressed regret that some of those who were part of the accord on the demand that the next Nigeria’s president should be a southerner eventually “chickened out”.

“Unfortunately, enemies of progress came in. Because one thing that we believed as men of integrity, as men who believed in equity, fairness and justice was our resolve.

“All of us and many others who chickened out, especially from the South resolved that after eight years of rule in the North, we all know that in the unwritten constitution of this country, that it was only right for the sake of justice and equity that presidency should come from the South. And that is what we have stood for.”

Ortom said further, “Unfortunately, we have found ourselves where we are. But, we told ourselves, we are not going to leave the PDP. You cannot build a house and when a snake creeps into your house, do you abandon that house and run away to go and build another one?”

In his welcome address, the Abia State governor, Dr. Okezie Ikpeazu informed that the Integrity Governors think, operate and execute their strategies and programmes in one accord.

He noted that beyond, their States, which they support mutually ahead of the 2023 elections, they are beefing up firm support for the PDP in Cross River where the moral tenets of equity, fairness and justice are deeply rooted.

“We have come under serious attack and very serious propaganda from all quarters but we are undeterred. We are determined to stand firm for the truth and soon, as the needful is done, I assure you that all of us will work assiduously to make sure that PDP wins election in 2023.”

Dr. Ikpeazu asserted that Nigeria is in dire strait and the Integrity Governors understand what should be done, which is why they are putting the right feet forward with a conviction that the country must be rescued.

“What we are preaching is not about our individual comfort but rather for you to see that we are saying the truth, laying a solid foundation for Nigerians today, and for our children in the future.

“I am an incurable optimist and I believe that soon, the voice of reason will sound in the ears of those who are yet to realize and see the wisdom behind our position and the things we are saying.”

2023: Only PDP Can Reset Nigeria To Working Ways – Okowa