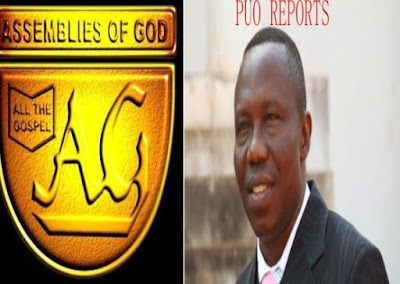 Ladies and Gentlemen ,Followers and Readers of PUO REPORTS

As I Did it during the Tribunal,Appeal Court and Supreme Court Days in Rivers and Abia States,am about to do it that same way in the matter involving Paul Emeka and Assemblies of God Nigeria .

Sincerely it is Unfortunate,but we must face our Fate,I was Born,Dedicated and Baptized in Assemblies of God Nigeria so i cannot fold my hands and allow a man who was disciplined for violating several sections of the Constitution of Assemblies of God to Destroy It with Lies and Propaganda

Paul Emeka is still occupying the National Headquaters of Assemblies of God Nigeria in Enugu because one Justice Anthony Onovo of the Enugu High Court gave him a Notorious Judgement in 2014 soon after he was Suspended by the Church ,not until Justice Emmanuel Agim of the Appeal Court in Enugu vacated that Judgement and upheld the decision of the General Council of Assemblies of God in Suspending and Dismissing Paul Emeka from the Church

Paul Emeka has filled and Assemblies of God Nigeria has responded to his Brief,and all documents that needed to be filled by both parties has been Filled.

So Believe Yea me that, the Internal Crises in Assemblies of God will be settled and Stand Down before the Ember Month