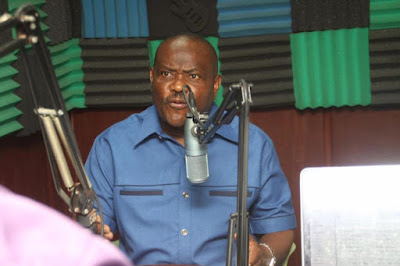 As part of activities to mark his 1st One Year in Office,Governor Nyesom Wike appeared on RYTHM 93.7FM in Portharcourt to Speak with Rivers People.

”We are happy that we have Restored Confidence”

”We believe that when ever we make a Promise, we’ll keep to those Promises ”

”We don’t want to play Politics for Road construction”

”Despite the Eight months of Legal Tussle, we still have something to show in our One year in office”

”The issue of Sanitation, we can’t say we have gotten it 100%. But we have improved and it will get better ‘

‘When we came on Board, our IGR was Less than 5b Naira, but it has increased now to 8b. We are working on it to improve to 15b Naira a Month”

Know that there’s a Jetty Project going on in Okirika, courtesy of Our Administration

‘No local Government will be abandoned in this Administration. We are just one year in office, please be patient with us’

“The kind of Amusement Park we want to Build in this State, will be one of a Kind. You can’t find it anywhere in the Country’

“We’ll do something that will be Sustainable, not to please anybody “

Any Project i award today, MUST be Completed before the End of my Tenure. I won’t leave any project abandoned

“You don’t just build for the Mere sake of building. My administration will not Politicise Projects”

“As i speak to you, the April Salaries has been paid…but you MUST first do your Biometric”

“If you don’t do your Biometrics, no amount of Blackmail can Stop us from doing the Right thing “-

“As I’m talking to you, I’ve not Collected my Salary because I’ve not done my Biometrics”

“I’ve been advised to Continue with the Biometrics Exercise because of the Fraud in the Civil service. So if you don’t do your Biometrics, you won’t be Paid “

While responding to the question asked about INEC;
“INEC Is trying to be funny. But anybody who knows us will know that they can’t Succeed to defraud us” –

“Everybody Wants Government Presence in their Local Government, but the Fund we are getting Won’t be Enough to go round at the same time. People should be Patient with us…WE WON’T
DISAPPOINT THEM” —