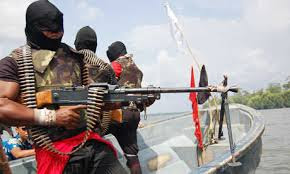 Militants suspected to be members of the Niger Delta Avengers have blown up an underground Chevron crude oil trunk line.

The trunk line is located along the Seria Creek near Abiteye, a few kilometres away from the company’s multi-billion dollars Tank Farm in Escravos, Warri South West local government area of Delta State.

The PUNCH gathered that the incident, which occurred midnight, was noticed by workers in the production department when they observed drop in production pressure.

A top Chevron management officer and a security source both separately confirmed the incident to our correspondent.

The source said a technical team of experienced engineers had been dispatched to the scene of the spill to ascertain the true cause.

Information available to us reveal that the Seria Creek and all adjoining creeks of Abiteye have now been covered with massive oil spill emanating from the trunk line.

A local source in the area said, “At the moment, the entire creek has been littered with crude oil.”

We will commission several roads before May 29...