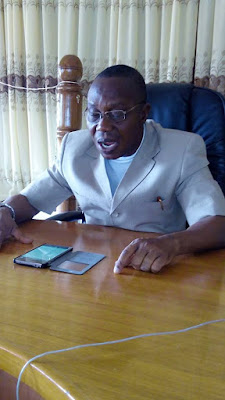 Ex-Communicated Former General Superintendent of Assemblies Of God Nigeria Rev Dr Paul Emeka this afternoon bursted into Tears while trying to deceive some Paid Journalists he hired to distort Facts over the outcome of Wednesday’s Sitting of the Upper Area Court were he is standing trial for Certificate Forgery.

Paul Emeka was weeping because Federal Radio Corporation reported the true position of what happened on Wednesday at the Upper Area Court,when Lawyers to Paul Emeka failed to Appear to take the Judgement of the Court on the Application he filed seeking a stay of Execution against the Order of Justice Umar Yusuf Kargarko for the Police to Arrest and produce him for Trial

Karma is Really a Bitch

QUOTE OF THE DAY: Hear Amaechi Today In Portharcourt