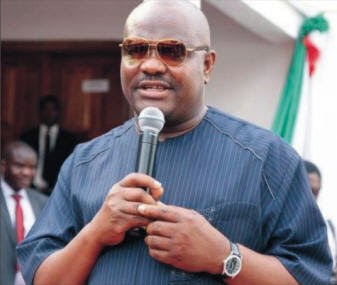 Rivers State Governor, Nyesom Ezenwo Wike has declared that the state is not celebrating democracy  day because  the  Independent National Electoral Commission, INEC,  has destroyed  the foundation  of  democracy  by plotting  to allocate legislative  seats in the state.

The governor  also declared that his administration  will  deliver  more pro-people  projects and programmes in his second year in office.

Speaking  during  a thanksgiving  mass to mark the first  year anniversary of his administration at the Our Lady of Holy Rosary of the Catholic Institute of West Africa, CIWA,  in Port Harcourt on Sunday,   Governor Wike said  that INEC  has perfected plans to allocate legislative  seats in Rivers State instead of  conducting  the  inconclusive  rerun  elections  in  the State.

He said: “We will not celebrate democracy because INEC wants to determine who will represent  Rivers State.  After two months of cancellation of elections, so that it can allocate some seats to APC  and others to PDP. Is that democracy?

“We will not  accept  allocation of seats.  We will  only accept  elections for the remaining  seats”.

On his first year in office,  Governor Wike  said  despite the challenges  faced by his administration, he performed creditably  , ensuring  that  that the people enjoyed the dividends  of democracy.

He said that the successes already recorded will be surpassed  in his second  year  in office.

“This is one year, you have not seen anything  as far as development  is concerned.  In our second year, more development  will be witnessed across the state”, he said.

He informed  that the administration  has taken  measures  to save funds through  biometrics  to determine  the true number of civil servants  in the employment  of the state government.

He said that the state government  has already  paid the April  salaries  of the 13000 civil servants who have completed their biometrics.

According  to  the  governor,  only civil  servants  who have done their biometrics  will henceforth  receive  their salaries.

He added that  all 54000 civil servants must physically present themselves  for biometrics  before they are considered  to  be  employees of the Rivers State Government.

On security,  Governor Wike said  that  he has provided the needed logistics  for Security  Agencies  to improve  security  across the state. He noted that he has received  assurances  that in the coming months, security  will improve.

He noted that nobody is above the law in the state pointing out that anybody  that commits a crime will be diligently  prosecuted.

The church service  had in attendance  leaders of the state.