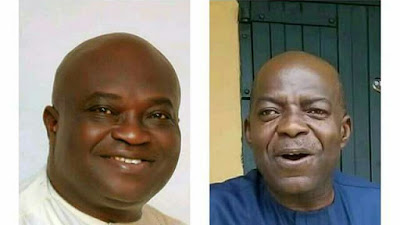 After reviewing the state of affairs in my dear state of Abia one year since the present PDP led government came to power amidst unprecedented political brigandage, I am compelled by the general feeling of sobriety, dwindling socio-economic fortunes and general groaning of Abians to express my utmost displeasure and disapproval of the abysmal performance of the present government, which has failed to live up to expectations in all ramifications of governance, and hereby state the following;

1.That after initially giving Abians the impression of his determination to embark on massive infrastructural development, especially in the city of Aba, projects on ground show that the desired vision, seriousness and sincerity required to herald a new but progressive dawn in Abia have not been applied in making this a reality hence the celebration of the same mediocre achievements that neither justify the huge resources gotten nor speak well of those presiding over the affairs of the state as competent and serious minded individuals.
2. That the activities of government is still run in secrecy and devoid of adherence to standard and acceptable administrative and democratic practices, hence the award of road contracts without disclosing the cost and identity of contractors, while such faceless contractors embark on projects without feasibility studies and other construction standard practices required for effective result.
3. That the Governor failed Abia workers from day one when he reneged on his campaign promise to pay them by or before the 28th of every month, and went ahead to owe them months of salary arrears without remorse or readiness to pay.
4. That the Ikpeazu led Government has shown unprecedented lack of transparency, sincerity, and openness in every thing concerning the management of the finances of the state by failing till date to disclose the true financial status of the state inherited by him even after several appeals to this effect. He has refused to tell Abians how much he pockets at the end of every month as security vote. He has failed to give good account of the 14.150 billion naira bailout fund, the 10 billion naira loan, the huge statutory monthly state and Local Government allocations, as well as justify the huge salary debt being owed Abia workers. Also segregation and discrimination have been introduced in the payment of Local government workers as workers are paid based on how they voted during the election. For instance, in Umuahia South LGA, workers who are accused of being anti PDP have been denied their salaries for about 7 months as against their pro PDP counterparts who are owed for only about 2 months. Some of them have been given punitive transfers to hostile local governments to encourage them to resign.
5. That the recent placement of Abia as the 5th most indebted state of the federation by the Debt Management Office (DMO) with a debt stock of 78 billion naira with zero infrastructure on ground to justify the debt serves as an indictment on the Governor and his party, the PDP which prior to this time had repeatedly lied to the entire nation about Abia’s healthy financial status. And that the denial of the accuracy of this report by Abia state government and its subsequent failure to come up with its own facts more than two months after shows primitive lack of understanding of administrative responsibilities in a democratic setting, unbridled arrogance and lack of respect for the people of Abia, and unforgivable incompetence and financial recklessness.
6. That the continuous shielding of T.A.Orji who is suspected to have plundered and contributed in plunging Abia into its present financial mess by the Okezie Ikpeazu led government clearly shows Ikpeazu’s unwillingness to succeed for the sake of the suffering Abia masses.
7. That under the nose of the PDP led government, life has remained brutish and hellish for Abians with insecurity caused by armed robbery and kidnapping assuming a very dangerous dimension, while economic activities are swiftly coming to a halt.
8. That while the government noisily celebrates the construction and rehabilitation of a few kilometers of roads as its only achievement for one year of its existence, Education, Agriculture, and Health care delivery have all remained in a pitiable state of abandonment, at the expense of the suffering masses. I am therefore immensely appalled like millions of suffering Abia masses that this traumatizing situation still persists in this 21st century Abia, when governance has been recognized the world over as a social contract between the leaders and the led, and when governance is pursued with zero tolerance for mediocrity, rather with high sense of duty and responsibility.
We are also surprised that the state government continues to pay monthly stipend of up to N1million to some jobless and lazy drones who call themselves PDP Elders in the state. This is a policy introduced by the last administration in the state. Their only job is to provide their houses for rigging elections and writing fake results during elections. Let me warn that if these payments are not stopped forthwith, we will commence legal action against the government to compel it to not only stop these illegal payments, but force a return of past payments to the state treasury.
I therefore call on Dr. Okezie Ikpeazu and his party the PDP to stop making Abia look like a state under a spell. We do not accept that the future of Abia and Abians should be sacrificed on the platform of retrogressive political experimentation and practices like; personalization of governance, God fatherism, Anti people political patronage, Lack of Accountability, Administrative secrecy, Use of thugs for the implementation of government policies and programs and unbridled lies and propaganda peddled by the state and other mercenary media.
Dr. Ikpeazu has two options viz: to listen to wise counsel and sit up or to continue basking in the illusion of deceit believing that the people do not know anything. The choice is his.
Finally, let me use this medium to wish the Children of Abia, Happy Children’s day and the entire Abia people, Happy democracy day celebration.
Signed
Ferdinand Ekeoma
Media Assistant to Dr. Alex Otti

BIAFRA: Igbo’s Residing in the North are “sacrificial lambs”, says...