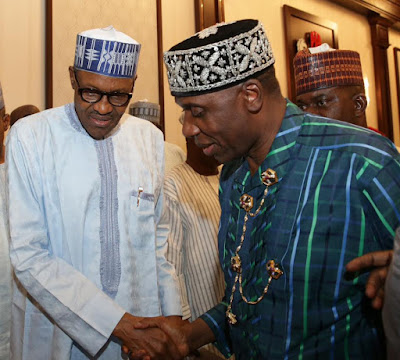 The All Progressives Congress (APC) in Rivers State has declared President Muhammadu Buhari an honourary son of the Niger Delta, saying that he has in only one year in office demonstrated his great love for the region and determination to fast-track its development.
The party in a statement issued in Port Harcourt to mark the first year anniversary of the Buhari Administration cited the inclusion of the Calabar – Lagos Rail Line and Calabar – Itu Road in the 2016 budget, as well as the impending Ogoni clean-up exercise to justify its position that President Buhari has done enough within a short while to qualify to be regarded as a Niger Delta son.

Rivers APC described the inclusion of the Calabar – Lagos Rail Line in the 2016 Budget as a demonstration of the love President Muhammadu has for the Niger Delta and a measure of his seriousness of to fast-track the development of the region and arrest unemployment in the area.

The statement signed by Rivers APC Chairman, Chief (Dr). Davies Ibiamu Ikanya, said: “The importance of this singular project towards the general economic enhancement of the region and the country at large cannot be over-emphasised. With the inclusion of the death trap called Calabar – Itu Road and other projects of prime benefit to the region in the 2016 budget and the kick-starting of the Ogoni clean-up exercise in the next few days, which the past administrations including the high corrupt administration of Dr Jonathan though a son of the region wickedly and  totally ignored, it will not be out of place therefore if we declare President Muhammadu Buhari as a true friend and son of the Niger Delta region.”. With this development, all the efforts of Chief Wike to frustrate this excerise now amounts to noting.

The statements also pointed to the earmarking of N60 billion for the Calabar – Lagos Rail Line and N6.6 billion to rehabilitate the Calabar – Itu Federal Highway, in addition to the following major projects in the South-South: The rehabilitation of Odukpani – Itu – Ikot Ekpene Road in Cross River/Akwa Ibom states (N6 billion); construction and installation of 10km of 33KV line and associated 2x15MVA 33/11KV sub-station at Ibuzor, Delta State (N360 million); as well as bill of engineering measurement for 33KV overhead line single circuit line from Glory Power Station to Federal University at Otuoke, Bayelsa State, with 2×2.5MVA (N257.5 million).

“These laudable projects being undertaken by the Buhari Administration in its first year in office speak volumes about his desire to speedily develop our region. This is truly remarkable as the administration is doing this despite the unacceptable acts of some of our youths who have resorted to sabotaging the economic fortunes of our nation by blowing up oil facilities at an alarming rate. We cannot thank President Buhari and his team enough for this great love for the Niger Delta. We wish to assure him of the unalloyed support of the region towards his efforts and drive to rebuild our nation from the shackles imposed by the inept PDP administration, even as we appeal to aggrieved Niger Deltans to sheath their swords and give the Buhari Administration the much needed support to right the wrongs of the past,” Rivers APC said.

The party rated the Buhari Administration high on its First Anniversary, noting that it has taken bold steps to fight corruption and insecurity across the country and to lay a solid foundation for a better tomorrow. “President Buhari, since assuming office on May 29, 2015, has proved himself to be a visionary leader who can turn around the fortunes of our dear nation if given maximum support and encouragement. We therefore urge Nigerians to bear the temporary pains of the present with calmness and give the Buhari Administration every atom of cooperation to enable it take the country to the Promised Land,” Rivers APC said.

It congratulated Buhari’s cabinet members for their sterling performance in their few months in office, “especially our leader, Hon. Minister of Transportation, Rt. Hon. Chibuike Rotimi Amaechi, who has proved himself as one of the pillars of this administration by his unflinching commitment towards the actualisation of the principles, goals and vision of President Buhari towards building a new Nigeria with its foundation on the rule of law – a virile, focussed and corrupt free Nigeria that we all can be proud of.”

GhenGehn>>Winning by hook or crook era over – Jega