Home Uncategorized “There Is Nothing To Celebrate In Rivers State Under Nyesom Wike ”...
Spread the post 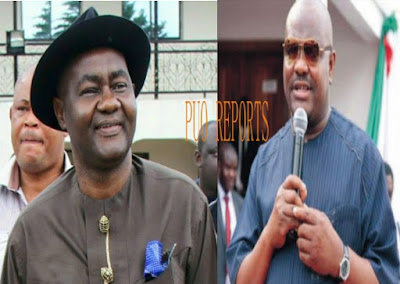 Senatorial Candidate of the All Progressive Congress for Rivers South East Senatorial District Senator Magnus Abe has said that there is nothing to celebrate as far as Nyesom Wike remains the Governor of Rivers State.

He said this when he appeared in a Radio Programme(TALK OF THE TOWN) on Rythm 93.7 Portharcourt on Monday.

“I was a bit concerned when I heard that the governor said he was not celebrating democracy day because of INEC, and the fact that INEC is reviewing procedures or whatever internal things they’re doing regarding the Elections in Rivers State. I share his concern about the fact that up till now, Rivers State has not been represented, particularly in my senatorial district.
.
“But the point I want to make is that there are reasons here in Rivers State why we should not and cannot celebrate democracy day. Just yesterday, somewhere in Ahoada, I hear over 8 people were killed, including the oldest man in the village. As we speak now, in my own village, boys are going around with guns, nobody slept last night. I was told they even chased somebody to a church, and matcheted him right there in a church with people scampering for safety. As we talk now, in Luawii and Kapnyo, several people are dead, houses burnt… You know, all over… Yesterday, a friend of mine stopped at a fuel station at Rumoula to buy petrol, and while at the filling station, some people brought out guns and robbed everybody, right there in Rumuola. This is what is going on all over Rivers State.
.
“In such circumstances, do we really have much to celebrate? The first responsibility of government is the maintenance of law and order. If people are free and save they can look for water, they can look for light, they can look for food; but they cannot look for security if they’re not safe. So I think the governor should really do something to address the issue of security in this state. And until he does that, there is really nothing to celebrate in Rivers State.” He SAID

Wike is God-sent to Rivers – Obuah

Gatemen Kill Master For offering only N1500 During Robbery