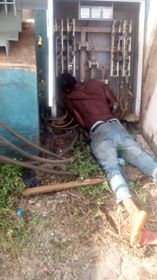 Two electricity vandals, weekend met their waterloo in Orji Community, a nearby town in Owerri, the Imo State Capital.

The thieves, according to eye witnesses account, around 2am on the fateful day went to steal cable electricity wires connected to a transformer , but unfortunately for them they got electrocuted in the process.

Sources told Okeomanews that the dead vandals were unluckly because no sooner had they climbed the transformer to unconnect the cable wires and do away with them, than electricity was restored, leading to their instant electrocution .

They said “they brought light around 2am and it was the time they were on the transformer trying to disconnect the cable wires before they were electrocuted”.
The delighted sources disclosed that the scene of the crime, Orji Mechanic Village, near Tansi Catholic Church has been going through robbery attacks in recent times.
They informed that it was as a result of the incessant robbery attacks in the area that made the residents to invite one man of God, Thursday, Evangelist Austin Aguwa who prayed, asking God to expose the perpetrators. 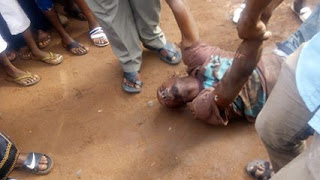 They were optimistic that the efficacy of the prayers offered by Evang. Ajunwa led to the electrocution of the electricity vandals 24 hours later
A team of police men and electricity officials came and evacuated the lifeless bodies . when Okeomanews visited the scene of the incident crowd of people were seen discussing in groups about the incident.
When contacted, the Police Public Relations Officer in the state, Mr. Andrew Enwerem, A Deputy Superintendent of Police, DSP, said that he was yet to be briefed on the development.