Home Uncategorized Sagay – Wike Set Up Amaechi To Prevent Him From Becoming A...
Spread the post 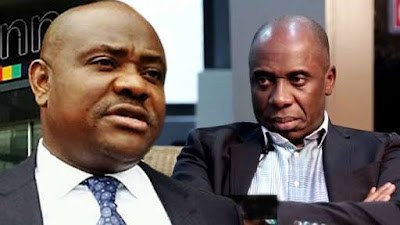 Prof. Itse Sagay yesterday said that Rivers State Governor, Nyesom Wike, deliberately set up an investigative panel to probe his predecessor, Rotimi Amae­chi, and subsequently issued a white panel on the probe in order to block his chances of being appointed a minister.

Sagay also said in the next six months, all corruption cases in court will be concluded. He said this on a television programme: “Assessing the government,” yesterday.

Asked by the anchor why current members of the All Progressives Congress ( APC), formerly in the Peoples Democratic Party (PDP) were not being persecuted, especially those who were governors, Sagay said if anybody has any evidence against any APC members, suspected to have looted public fund should come forward and report such a politician, assuring that investigation would commence.

On why panel raised by Wike to investigate Amaechi was not followed to the letter or taken over by the Economic and Financial Crimes Commission (EFCC), he said the panel lacked credibility.