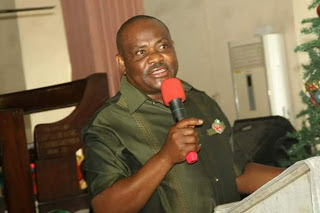 Ahead of  the  visit of  President  Muhammadu Buhari  to Rivers State for the flag off  of the implementation of the UNEP Report , Rivers State Governor, Nyesom Ezenwo Wike has banned the operations  of  motorcycles and tricycles in Gokana and Khana Local Government Areas between  6 am and 6pm on Thursday.

In a state-wide  broadcast  on  Wednesday, Governor  Wike  said  that  the  measure is aimed at maintaining  security  in the area during  and after the President’s visit .

He said: “As part of measures to enhance security during Mr. President’s visit I hereby place a ban on the operations of motorcycles and tricycles in Gokana and Khana Local Government Areas between 6 a.m. and 6 pm on Thursday, 2nd June 2016. The security agencies have been directed to enforce this ban and ensure full compliance.

“I call on Rivers people, particularly the people of Ogoniland, to come out in great numbers and give our amiable President a rousing welcome during his visit.”

Speaking  further,  Governor Wike said: “The President and Commander-in-Chief of the Federal Republic of Nigeria, His Excellency, President Muhammadu Buhari, CGFR, is paying an official visit to Rivers State, tomorrow, Thursday, 2nd June 2016 to formally launch the clean up of Ogoniland and other oil impacted communities in the Niger Delta.

“Mr. President’s visit to the State is both historic and significant. It is historic because it marks his first official visit to the Sate since assuming office as the President of this great nation. It is most significant because Mr. President is not on a political mission but to kick-start the largest environmental cleanup in our nation’s history, for which Rivers people, and indeed the Niger Delta will remain grateful. “

He appealed  to  Rivers  people to be peaceful during  the  President’s  Visit.

He said: “I call on Rivers people to be peaceful, law-abiding and demonstrate the traditional Rivers hospitality towards Mr. President and his distinguished entourage throughout the visit.

“As I have noted earlier, Mr. President is here as the father of the nation who cares about the environmental and developmental challenges that we face as one of his primary constituencies. “

The governor added: “Accordingly, his presence in Rivers State is not an occasion for political campaigns by anybody or political party. Rather, it is an occasion and an opportunity for us to demonstrate unity of purpose and our readiness to work together with Mr. President to move Rivers State and the nation forward.

“Let me therefore advise desperate politicians in our midst to be mindful of the charged social and economic situation in the country and refrain from making unguarded statements over Mr. President’s visit that could inflame political rivalry and precipitate unnecessary upheavals in the State.