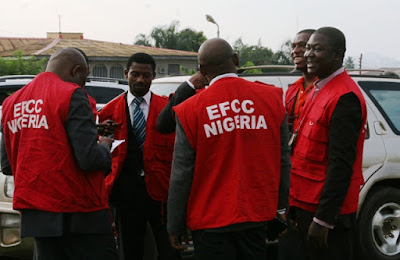 It was learnt that the accounts were frozen as part of investigation into the N4bn disbursed by the Goodluck Jonathan Campaign Organisation during the build-up to the 2015 presidential election.

The money, which was disbursed by the Director of Finance of the campaign organisation, Senator Nenadi Usman, was alleged to have emanated from the account of the Central Bank of Nigeria.

A source at the anti-graft agency stated that “Udenwa and Onwuliri got N350m in two tranches. The first tranche of N150m was paid into their joint account with Zenith Bank on January 13, 2015.

“The second tranche of N200m was credited into their account with Diamond Bank.”

Others who allegedly received part of the fund include a former Minister of Aviation, Chief Femi Fani-Kayode, who admitted to receiving N840m through his Zenith Bank account with number 1004735721.

He is currently in the custody of the EFCC while the account has since been frozen.

When contacted on the telephone, however, Udenwa said he was not aware if the account had been frozen or not since he was no longer using it.

“Has it been frozen? I don’t know. When they quizzed me a few weeks ago, I told them that the account was opened solely for the purpose of receiving campaign funds and we are no longer using the account,” he said.