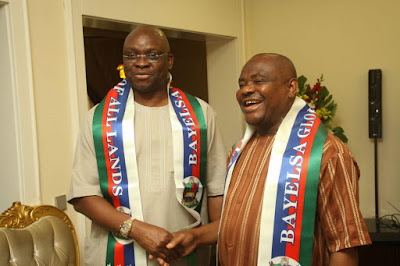 It has emerged that the alleged plan by the federal government to impose a foreign travel ban on Governor Ayodele Fayose of Ekiti State might not be unconnected to his criticism of President Muhammad Buhari.

An intelligence source disclosed Wednesday that apart from the numerous verbal attacks against the president and the All Progressives Congress (APC), the government at the centre did not take kindly to Fayose’s utterances during a recent visit to China.
According to the source, the presidency was embarrassed when the outspoken governor from the opposition Peoples Democratic Party (PDP) asked the Chinese government not to honour the recent loan deal signed by the two sovereign governments.
Even before his utterances in China, said the source, the presidency was uncomfortable with other statements by the governor but was hampered by constitutional constraints to invite him for questioning.
“The federal government was both alarmed and embarrassed when Fayose went to China to oppose the loan deal,” said the security source, who disclosed that since then the governor had been placed under watch, including his planned foreign trips.
Fayose on Tuesday opened a lead on the issue and challenged the federal government to carry out the alleged plot preventing him from travelling out of the country, saying: “Under the federal system of government, state governors are not appendages of the president and as a leading opposition figure in Nigeria, he cannot be cowed by President Muhammadu Buhari and his agents.”
Fayose was said to have reacted to reports that two governors, one from the South-west and another from the South-south, had been placed on travel restrictions on Buhari’s orders, insisting at a press conference by his media aide, Lere Olayinka, that “whenever he wished to travel out of Nigeria, he will do so in the full glare of the public”.

“I am not surprised or disappointed by this latest plot of the Buhari administration because the president that we know is a man without any atom of respect for the rights of Nigerians as enshrined in the 1999 Constitution, the Universal Declaration of Human Rights and the African Charter on Human and Peoples’ Rights, and this he demonstrated as a military dictator and is now demonstrating it as a democratically elected president,” Fayose said in the statement.
Security sources also revealed that the second governor placed under watch and the alleged travel restriction is Nyesom Wike of Rivers State for slightly different reasons.
Wike, who had been engaged in a power struggle with his immediate predecessor and current Minister of Transportation, Rotimi Amaechi, is being watched over the security situation in Rivers State in particular and the Niger Delta in general.
“The second governor is Wike. The possible reason for the planned action revolves around Fayose’s utterances against the president and the likelihood of making the same utterances abroad like he did in China.
“Secondly, is the suspicion against Wike with respect to the ongoing crisis in Niger Delta and the risk of what he might do outside the shores of the country,” the intelligence source said.
However, the source disclosed that there was a consensus that since Fayose had raised the alarm, the federal government might not be able to impose a travel ban in order to also avoid a backlash from human rights groups and the international community.

Celebration of Love: Dandy Loveday Finally Ties the Knot with...