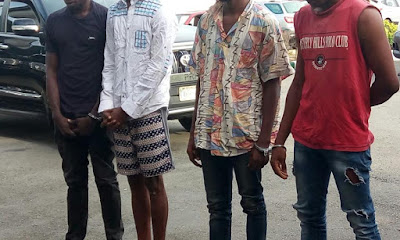 The DSS Director in Abia State, Mr Korade Kamoju has paraded the 4 suspected cultists who killed and beheaded 2 students of ABSU on March 12th, 2016.

Speaking during the parading of the suspects, the Governor, Dr. Okezie Ikpeazu described the cultists as fierce and wicked, he regretted how some children who are sent to school could abandon schooling and turned to evil, stating that they represent kidnappers and everything that is bad about the society.
Further, he wondered how many lives that must have been wasted by the activities of the cultists and said that God will judge and sanction them appropriately.

Dr. Ikpeazu said that anyone who kills and goes ahead to use the heads of his victims as goal posts must have gone to the limits and assured that the full weights of law will fall on them, adding that it will serve as deterrent to other cultists and thanked the security agencies for a work well done

Parading the suspects, Mr Korade Kamoju said, following the incident that happened in ABSU in which 2 students were beheaded, his men went into investigation and found out that the suspects are members of Bokinafaso who went on revenge mission to another cult-Mafiance over the killing of their leader, Mr. Collins Agwu Kalu, popularly called Biggy. Mr Kamoju stated that that was a lesson that there is no hiding place for criminals in Abia and thanked the Governor for his support as well as other security agencies (Army and Police) for their assistance.