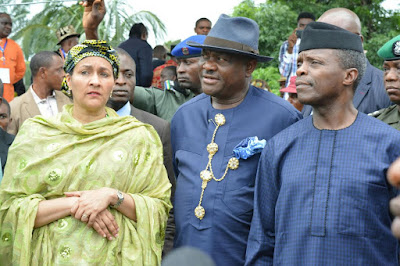 Rivers  State Governor, Nyesom Ezenwo Wike has declared that the state  government  will provide  the  required  platform  for the successful  clean-up  of  Ogoni land and the implementation of  the  UNEP Report.

Speaking  during  the  launch of the clean-up of Ogoni land and other impacted communities  in the Niger Delta on Thursday  in Bodo,  Governor  Wike  said  that  the Rivers  State  is ever willing  to  support  the  exercise.

The launch of the clean-up of Ogoni land was flagged off  by Vice President  Yemi Osinbajo,  who represented President Muhammadu Buhari.

He said: “On our part, the Rivers State Government will ever be willing to provide the platform for a smooth achievement of this long awaited intervention.

“We acknowledge that this is a federal initiative. The direct impact is borne by our people. We therefore urge all our stakeholders to embrace and support this Federal Government gesture and ensure a hitch-free exercise “.

The governor  commended President  Muhammadu Buhari  for initiating the clean up  exercise,  noting that the presence of top officials  of the Rivers State Government  indicated that the state will fully  support  the exercise.

He noted: “We therefore welcome this initiative wholeheartedly as shown by our enthusiastic presence, believing that the recommendations of UNEP will be systematically executed. This is because, we believe, that only environmental justice would restore sustainable peace, stability and socio-economic progress in the Niger Delta.

“We are therefore commend Mr. President’s determination to close this ugly chapter in our country’s history. Although this has taken long in coming; it is never too late when it comes to the environment. Therefore, Mr. President Sir, your presence in Ogoniland today is a testimonial of the long awaited clean-up and remediation exercises of the Niger Delta polluted environment.”

The  governor  stated that the entire Niger Delta has been subjected to the worst forms of environmental degradation ever experienced by mankind in this part of the world.

He added that Millions of barrels of oil have been spilled into the environment by companies exploiting and extracting hydrocarbons from the area with severe consequences to the ecosystem, including wildlife, marine habitations, soil and water quality and human health.

According to him: “Despite continuing protests by the people, the environmental degradation of the Niger Delta has not stopped. Oil spills continue to occur with distressing regularity even in Ogoniland, where oil exploitation had since 1993 ceased.

“As the UNEP Report starkly reveals, the degree of environmental damage in the Niger Delta has been so deep and expansive that it would take several decades to carry out full remediation of impacted sites.

“The UNEP report, which is the precursor to today’s event, is significant for at least, two reasons. First, it presents the best available and factually detailed documentation of the scale of the existing and continuing damage to the entire Ogoni environment and by extension, the Niger Delta.

“Second and most significantly, it presents a clear roadmap on the priorities for action by government, stakeholders and the international community in terms of clean-up, remediation and restoration of the damage that has accumulated over the years. “

He explained  that  the  launch of the clean-up  exercise  is a watershed for the victims of   environmental  degradation,  pointing  out that the exercise marks a success in the  collective struggle for environmental justice from the Nigerian nation and the world community.

A statement  by  Simeon Nwakaudu,  Special Assistant to the Rivers State Governor on Electronic Media  informed  that  Governor Wike  led top Rivers State  Stakeholders  from Ogoniland  and other parts of the state to the launch  of  the  clean-up exercise.