Home Uncategorized I did everything to make Jonathan clean Ogoniland but he refused –...
Spread the post 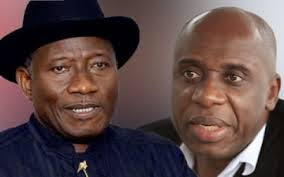 Minister of Transport and former Governor of Rivers State, Rotimi Amaechi has said that immediate past president, Goodluck Jonathan, clearly turned his deaf ears to the plight of the Ogoni people and the Niger Delta in general.

He said, “We did everything possible as a sitting government to make the president implement the UNEP report, everything. But the report was not implemented after all.”

Amaechi noted that the 1b dollar clean up exercise would create jobs for the people of the region.

He, however, thanked the President Buhari -led administration for coming to the aid of the Ogoni people and for fulfilling part of his campaign promises of cleaning up the region.