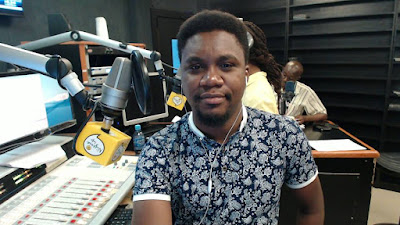 PETITION OVER MY UNJUSTIFIED HARASSMENT BY STATE AGENCIES

I am Kofi Bartels, a Ghanaian broadcast journalist with Nigeria Info FM, Port Harcourt.
I have been going through an ordeal and your kind intervention will ensure to save me from further harassment and eventual deportation.

Even though I was born and raised in Nigeria, I use a Ghanaian passport as a result of my parentage. I was invited by the Nigerian Immigration Service to appear before the Comptroller in Rivers State with documents pertaining to my stay and work in Nigeria. I did that on Tuesday May 3, where I was asked to fill some forms, giving my personal details. My passport and residence permit card were seized by the Immigration on the order of the Rivers State Comptroller and I was asked to return at a later date with evidence of my tax returns for the last six months.

I wasn’t told why I was invited or why my passport was seized. My source in the Immigration tells me a petition was written against me claiming I’m interfering in Nigeria’s politics and security with my work and that I’m a threat to the nation’s stability. I’m told a report has been sent to Abuja by the State Comptroller recommending my immediate deportation. My analysis is that by doing my work as a broadcast journalist without fear or favour, I’ve made some people unhappy and they have decided the best way to get rid of me is to use the NIS. Fortunately for me (and unfortunately for them), all my papers are intact but they are very determined.

On Wednesday May 25, I was picked up by the DSS (State Security Service) on the orders of the State Director. I wasn’t told why but was asked to write a statement. When I told the DSS officers that I could not write a statement when I’ve not been informed of the charges against me, I was shown a handwritten statement (one sentence) by the Rivers State Chairman of the Nigerian Union of Journalists (NUJ) stating that I am not a member of the Union. Beneath the statement was a charge against me of illegally practicing journalism without registration (with NUJ). I wrote my statement and within three hours, I was allowed to leave the DSS premises.

I was invited again by the DSS and reported there on Tuesday 31st May, 2016. I was asked to submit recorded clips of my radio program and I was made to write additional statements about why the Immigration invited me and also why my radio station put out a broadcast informing the public that I was picked up. So far, I have not been given any concrete reason for my ordeal nor told of the existence of any petition against me. All I have seen at the DSS is a handwritten letter by the NUJ Chairman in Rivers State which states that I am not a member of the union and a minute beneath the statement which says my offence is ‘illegally practicing journalism in Nigeria’. I have been forced to write statements by the DSS and my feeling is that I am being guided to write what they want so that they can build a case against me. The DSS, to my knowledge, is an agency established to provide security to Nigeria and my constant presence at their office gives the impression that I pose a security threat, which I do not. The trauma I have suffered and damage to my hard-earned reputation cannot be quantified. To my knowledge, the Nigeria Broadcasting Commission is saddled with the responsibility of regulating broadcasting in Nigeria. I wonder why the DSS have asked for two weeks worth of my radio program’s recording so they can analyse. Moreover, if the DSS has an issue with any of my programs, they should/would have pointed out the specific issue, topic, date of presentation and offence.
This is a clear case of someone powerful attempting to use the agencies of state to stifle free press.
Mr. Speaker, this is clearly an attack on the freedom of speech and free press in Nigeria and if allowed to go unchecked it will repeat itself, thereby destroying the very foundations of democracy which your highly esteemed House upholds. This is also a flagrant disregard for the constitution of the Federal Republic of Nigeria and the various international treaties to which Nigeria is a signatory, such as the ECOWAS Protocol, the United Nations Convention on Human and People’s Rights, the African Charter on Human and People’s Rights among others. These arbitrary and unwarranted actions of harassment and intimidation by the Nigeria Immigration Service and the Department of State Services threatens to harm the cordial relations that have existed between Nigeria and Ghana for years.

I plead for your kind intervention to stop my further harassment and to ensure that my passport and residence permit card is returned to me.
Thanks for your kind attention.
Yours faithfully,
Kofi Bartels
Broadcast Journalist
Nigeria Info FM

PDP must imbibe spirit of discipline to win 2019 elections –...