Home Uncategorized Graphic Photos: Accident Claims The Lives Of A Pregnant Woman,Three Of Her...
Spread the post 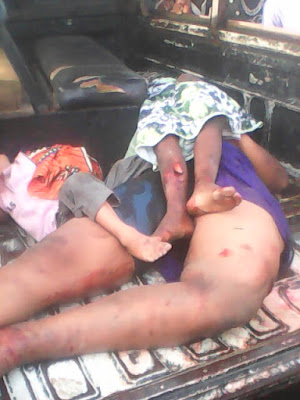 A Pregnant Woman whose named was given to PUO REPORTS as Joy and her three Children has been crushed to Death by a Vehicle that felled Break at the Ogbele Junction in Elele,Ikwerre Local Government Area in Rivers State.

Eye Witnesses told PUO METRO that the car lost its break Control and crushed the Pregnant Woman,Three Of Her Children and the Okada Man carrying them to Church this Morning

It was gathered that the Driver fled immediately he sensed that the Woman,Her Three Children and the Okada Man has died at the Spot

As of the time PUO REPORTS filed in this Report,the Police in Elele has taken away the Lifeless bodies of the Victims to deposit at the Mortuary