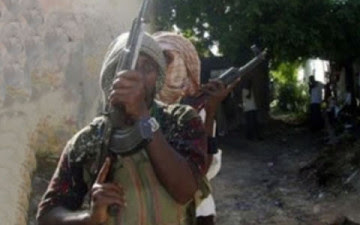 A naval officer was among those killed when members of two cult groups stormed the communities and engaged each other in a free-for-all.

The gunmen, believed to be of Greenlanders cult, invaded Aluu in reprisal against a rival group, Icelanders and killed 15 persons, including a nursing mother.

A naval personnel, who was among the Joint Task Force team that went to the area to bring the situation under control, was hit by a bullet from the cultists.

Many others were injured during the attack in the Aluu community.

It was gathered that the cult members also killed some innocent persons and left several others with bullet wounds.

Some of the cult members also stormed Etche community and killed four persons, a community source, who witnessed the shootings, told SUNDAY PUNCH.

It was learnt that the gunmen invaded a superstore in Omuoda village, opened fire and killed several people.

The bandits later advanced to Omuahunwo village and killed four of their victims who were suspected to be cultists.

Our correspondents gathered that the assailants carried out the coordinated attacked based on information that some members of the Icelanders were taking refuge in Aluu. The incident left the residents of the area in anxiety as some people in the affected communities fled their homes.

A source who spoke on condition of anonymity said, “Some cult members believed to be members of Greenlanders entered the community and killed some people. The boys operated in a very terrible manner. They went to a supermarket where people usually go to buy something and opened fire on over six people.

“Some people narrowly escaped with gun wounds. We do not know the cause of the killings, although we suspected that it is a cult war.’’

In Obite, four persons suspected to be members of the Greenlanders were allegedly killed by the Icelanders.

A source in the area told SUNDAY PUNCH that the cult group invaded Obite at 8am on Saturday, destroyed and looted many property in the community.

“At the moment, people are running away and nobody knows who is who. The cult boys entered the community by 8am and started shooting the people they described as their enemies.

“The Icelanders boys were the ones that shot the Degbam boys, but the fear now is that the Degbam cult group has written a letter to the community, asking the residents to flee because they are going to revenge,’’ a source said.

When contacted, the Caretaker Chairman of Ikwerre LGA, Mr. Samuel Nwanosike, stated that the reports about the incident were overblown.

Nwanosike stressed that the government had swiftly responded to the situation and restored normalcy in the area.

The council chairman, who visited the area with some security personnel, stated that the bandits had been chased out of the community.

Nwanosike added that soldiers raided some hideouts in the area and rescued a victim, Kenneth Wobunwo, who was abducted two weeks ago. Wobunwo is the paramount ruler of Aluu community.

Nwanosike, however, confirmed that some of the hoodlums, who caused that unrest in the area, had been arrested during the security intervention.

When contacted, the state Assistant Public Relations Officer, Mrs. Grace Iringe-Koko, said she had not been briefed about the incident.

But a security source, spoke on condition of anonymity, told SUNDAY PUNCH that a naval officer was killed during the incident.