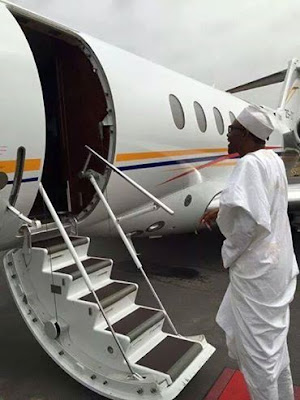 President Muhammadu Buhari will on Monday begin a 10-day vacation to attend to an ear infection that has forced him to shelve some local and foreign trips lately.

According to a statement on Sunday evening by his Special Adviser on Media and Publicity, Mr. Femi Adesina, the President is currently battling with what he called “a persistent ear infection.”

The presidential spokesman said although Buhari had been examined and treated by his personal physician and a specialist in Abuja, both doctors advised him to go for further evaluation in London as a precaution.

He said the President would therefore use the 10-day break to see an Ear, Nose and Throat specialist in London.

The statement read, “President Buhari will take 10 days off and travel to London from Monday June 6th, to rest.

“During the holiday, the President will see an Ear, Nose and Throat specialist for a persistent ear infection.

“The President was examined by his personal physician and an E.N.T specialist in Abuja and was treated.

“Both Nigerian doctors recommended further evaluation purely as a precaution.”

There have been speculations over the President’s state of health since he shelved his scheduled two-day official visit to Lagos State at the last minute and directed Vice-President Yemi Osinbajo to represent him.

The Presidency had attributed the development to what it called “scheduling difficulties.”

The issue resonated on Thursday when Buhari again shelved his trip to Rivers State during which he would have inaugurated the clean-up of Ogoniland and other oil-impacted communities.

He again sent Osinbajo to represent him at the event with the Presidency saying there was no big deal in the Vice-President representing Buhari at functions since “the  Presidency is one.”

Over the weekend, Buhari again put off his scheduled trip to Dakar, Senegal for the 49th Ordinary Session of the Economic Community of West African States, asking Osinbajo to once again represent him.

In all, the Presidency had claimed that the President was “fit as a fiddle” until Sunday when it finally admitted the ill-health.

This is the second time Buhari will be proceeding on vacation this year.

The President had earlier embarked on a  six-day vacation between February 5 and 10.

He remained in London throughout the first vacation.

He had earlier granted an interview where he said the doctors he had been consulting since the 1970s were based in London.

Husband of four gets four years for marijuana possession

OPINION:Amaechi and the Moral Burden on Buhari By Evaristus Douglas