Home Uncategorized Igbo presidency in 2023: Okorocha on his own –Ohanaeze
Spread the post 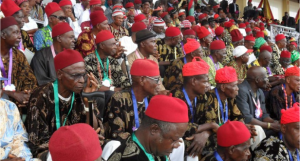 Mixed reactions yesterday trailed the comment by Imo State Governor Rochas Okorocha urging the South-East to wait till 2023 for the Presidency.
Okorocha said the Presidency has been zoned to the North for two terms of eight years (2015-2023), hence, Ndigbo should exercise patience till 2023. His comment followed former President Olusegun Obasanjo’s advice that Ndigbo should go for the slot in 2019.
Okorocha bared his mind on the Presidency when he visited Acting President Yemi Osinbajo in Abuja on Monday.
Prominent Igbos took on the governor, some condemned the statement, while others saw nothing wrong in his opinion.
Chairman of Ohanaeze Ndigbo in Anambra State, Chief Damian Okeke-Ogene, said the position of the socio-cultural group would be unveiled by the National President, Chief John Nwodo on the issue.
He said Okorocha was speaking for himself and not the entire opinion of Ndigbo, noting that Igbo presidency was overdue.
“For me, the Igbo presidency is overdue, Okorocha’s statement was his personal opinion. How were sure that 2023 will be guaranteed. I believed in the assertion of the former President Chief Olusegun Obasanjo that Igbos should position themselves for the presidency in 2019 and he gave reasons for his opinion”.
But a Board of Trustees member of All Progressives Grand Alliance (APGA), Chief Remmy Ezeonwuka, supported Okorocha, saying President Muhammadu Buhari should be allowed to finish his second term then, an Igbo man should be the next President after him.
“I’m supporting the idea of Rochas Okorocha that President Buhari be allowed to finish his second term. Then, an Igbo man should be the next president.
A former Minister for Power and Steel, Chief Goddy Ogbaga, said Ndigbo will be ready to take a shot at the Presidency in 2019, describing Okorocha’s statement as anti-South-East.
He said Ndigbo would be most honoured to take a shot at the presidency by coming together to form a formidable block that would enable them succeed in the project.
Supporting Okorocha is the Director-General of Voice of Nigeria (VON), Mr Osita Okechukwu.
Okechukwu backed the governor while addressing party faithful at the ongoing registration and revalidation of All Progressives Congress (APC) membership at Iwollo Oghe, Ezeagu Local Government Area, Enugu State. He said Okorocha’s comment was strategic.
President of Frank Worpet Inc, Prince Frank Okoye, in disagreeing with Okorocha, said: “It is unfortunate that Obasanjo, who is from another tribe is encouraging Igbos for the Presidency in 2019, while Okorocha is talking about 2023. Okorocha has always been on his own.
“As an Igbo man and a governor, how can he be saying something like that. How many years after the war, Igbos have not had a shot at the presidency and he is now saying we should wait till 2023,” he said.
On his part, Chief Alphonsus E.Udeigbo, President-General of Aba Landlords Association, had said: “I don’t know the  basis under which Okorocha is saying so, if it is as a result of an understanding the Igbos have with the North, one can say that it should be considered, but if it just for the Igbos to wait endlessly as we have been waiting since after the civil war, it does not worth it.
Reacting, former Speaker, Abia State House of Assembly and APC chieftain, Stanley Ohajuruka, said: “Okorocha’s call is a consensus position of the Igbos as it is, that we should support the second tenure of President Muhammadu Buhari in 2019, so that by 2023, he will also support us. That will be a reciprocal gesture from the North, having given them all the support they needed from us as Igbo people in 2019.”
Meanwhile, the Igbo Youth Movement (IYM) yesterday berated Okorocha.
Speaking through its Founder, Evang. Elliot Ugochukwu-Uko, the IYM said the governor has not shown any evidence of good leadership.
“Leaders advance the wishes and the good of their people like Ojukwu, M.I. Okpara and Nnamdi Kalu. Leaders live in the heart of their people, nobody takes Okorocha serious in Igboland.
“Ndigbo, like 80 per cent of Nigerians, want to see a restructured Nigeria anchored on regional autonomy and true fiscal federation built on justice and equity,” the group said.
Source :sun

BREAKING NEWS: The Mandate Abians Gave To Me is Non-Negotiable-Oti Declares

God and Buhari will judge you, Rivers APC tells Wike