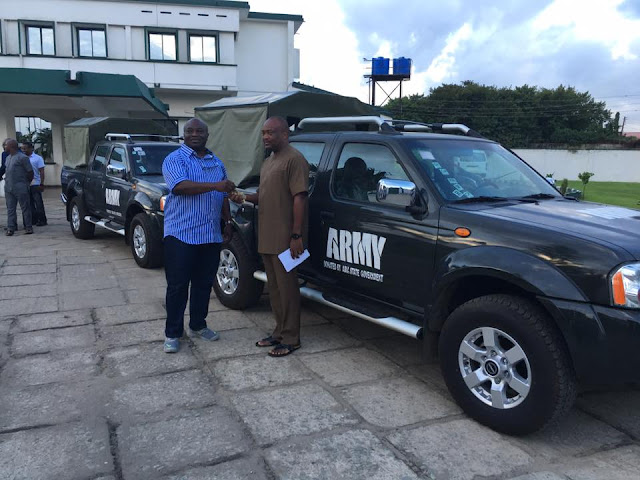 ”Could Not Commission Any Road in his One Year In Office”

Abia State Governor Okezie Ikpeazu cannot publicly boast of any Development or Project embarked upon and completed by his Administration except the Constant donation of Cars to Police,Army,Commissioners,Lawmakers,Transition Committee Chairmen etc.

When Okezie Ikpeazu emerged the Candidate of the Peoples Democratic Party(PDP) during the December 8 Abia State PDP Governorship Primaries,Abians were not allowed to sleep without hearing the Slogan”Okezuo Abia” Aba Ma Ndi Aba”

Ikpeazu did not hustle,struggle nor even spend his own personal money for the Peoples Democratic Party Governorship ticket like other aspirants Including the owner of Masters Energy Dr Uche Ogah and a former Minister of Labour Chief Emeka Woke

Everything was cleared ,and taken care for Ikpeazu by the Former Governor of Abia State and now Senator Representing Abia Central in the Senate Senator Theodore Orji

Ikpeazu,a native of Umuobiakwa Community in Obingwa Local Government Area was a Deputy Manager of the Abia State Environmental Protection Agency(ASEPA) for Aba Zone before he was handpicked by Chief Theodore Orji to cover the mess of his Maladrous 8year reign  in Abia

Abians were made to believe that with the emergence of Okezie Ikpeazu as the Governor of Abia State,the Commercial City of Aba will have a New Look,but Ikpeazu’s one year in Office as Governor has clearly defined his lack of Leadership Prowess.

One Week after his Inauguration as the Governor of Abia State,Okezie Ikpeazu presented himself as a Governor who was ready to take away sorrow,tears from the faces of the Abia People

On the 1st of June 2015, Ikpeazu flagged-off the construction of seven major roads in Aba,which he Ikpeazu promised to rehabilitate in his first 100 days in office.

After his 100 Days in Office,Ikpeazu was unable to Commision any of the above Roads,as Faulks Road leading to Ariaria International Market is now an Eyesore.

When PUO REPORTS Visited some of these Roads,Including Ibere Road by Ngwa Road,Ohanku Road,Aba Owerri Roads,there was no work on any of the Roads.

One major thing Aba people Need is Road,and if Okezie Ikpeazu,an Aba Man could not ameliorate the suffering of the Aba People,one wonders the Angel that will make the Aba Residents Smile

The Resources and Funds Ikeazu used in procuring cars for Police,Army,Commissioners,Lawmakers etc could have been used to complete a 10kilometer Road in Aba

In face of the nonpayment of arrears of workers’ salary and suspension of leave allowances including the strike action embarked upon by the lecturers of the Abia State Polytechnic, Aba, amongst other institutions,Ikpeazu in November 2015 procured Prado and Hyundai jeeps for Legislators and Commissioners in the State

“Why will Ikpeazu buy Prado and Hyundai jeeps for legislators and commissioners when arrears of workers’ salaries are yet to be fully settled despite the bailout he got from the federal government? When there is poverty in the land when most families are unable to get three square meals per day. I heard that even some of the road projects he is doing in Aba has been abandoned. What has he done for the poor masses since the seven months he has been in power? Nothing. Why will government always be favouring the rich against the poor? It is unfortunate. The governor has disappointed the people of the state with this action.” Mr. Ogbonnaya Kalu a trader at the Ubani Ibeku market had frowned at Ikpeazu,s Jamboree

All the Road Construction Governor Okezie Ikpeazu embarked upon during the Tribunal,Appeal and Supreme Court days has been abandoned simply because his election has been upheld by the highest Court in the Land.

Transition Committee Chairmen,Enyimba Football Club,ASEPA,ARMY,Abia Warriors FC, etc had all been a beneficiary of Okezie Ikpeazu;s Jamboree in his one year in Office

His action may no doubt be  as a results of the Votes he received from Aba during the 2015 Governorship election.