Home Uncategorized Harvest Of Arrest in Imo:Kidnappers Of Channels TV Reporter,59 Others Arrested
Spread the post 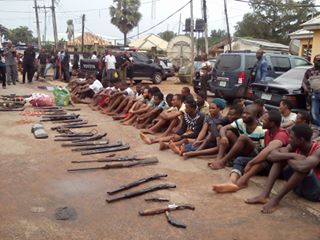 The police in Imo State, Tuesday paraded the suspected kidnappers of Channels Television Correspondent in the State, Mr. Tope Kuteyi and other kidnap, murder and robbery suspects before newsmen .

Parading the suspects, the state Commissioner of Police, CP Mr. Taiwo Lakanu said that, the suspects were nabbed by operatives of the command who are committed to making sure that the state is safe.
The CP who listed the crimes allegedly committed by the detained young men and women as kidnapping, murder, armed robbery, obtaining by false pretences, said, he was committed to riding the state of criminalities.
Mr. Lakanu who parading the 60 suspects and their exbites asserted that they were apprehended at different locations and said that they have made useful statements and would soon be charged to courts. 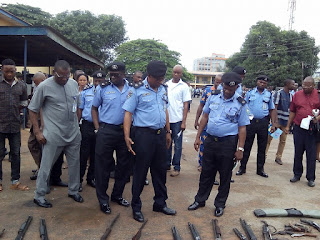 One of the suspected kidnappers of the Channels Television Correspondent, Uzochukwu James who confessed to the crime, disclosed that he was given N200,00(two hundred thousand Naira) from the ransom collected.
James, an auto electrician to the kidnap victim said he connived with three others to kidnap the journalist whom he works his car as an auto mechanic.