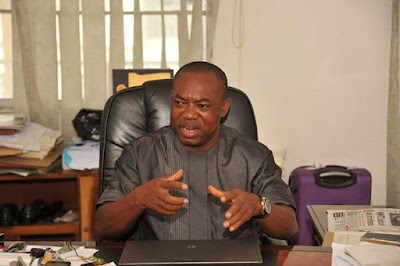 Dr Okezie Ikpeazu has announced the dissolution of  his media team with his Chief Press Secretary, Mr Godwin Adindu and other media aides directed to hand over government property in their possession to the Permanent Secretary of the Government House, Umuahia.

Ikpeazu’s Chief of Staff, Chief Chijioke Nwakodo announced the dissolution, yesterday. No reason was given for the dissolution but it might be connected to  the  handling of the visit of Sokoto State Governor, Aminu Tambuwal, to Abia on Wednesday.
Tambuwal’s visit to the state was not reported in the mainstream medi, in a visit where he commissioned some projects with the state governor. The situation reportedly angered the governor.
Adindu was among the first appointees of the Okezie Ikpeazu administration in June, 2015.
Wednesday event was actually the last straw that broke the camel’s back as several shortcomings of the team headed by the former Chief Press Secretary Mr Godwin Adindu were reportedly endured by the governor.

PUO REPORTS gathered that while Governor Okezie Ikpeazu and his Sokoto State Counterpart headed in Aba to commision roads reconstructed by his Administratiion,his Chief Press Secretary was no were to be found around Abia State

Adindu since 2015 he came into Office as the Chief Press Secretary to Governor Okezie Ikpeazi has never been in good terms with some powerful bloggers and Journalists,he was said to have sidelined other Media aides in the scheme of Things