Home Uncategorized We want grazing reserves in the north only, says Tambuwal
Spread the post 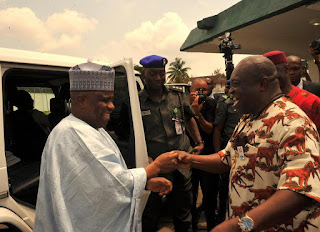 The Sokoto State Governor, Rt. Hon. Aminu Waziri Tambuwal has laid to eat the fears that the Federal Government is planing to establish  of Grazing Reserves for the Fulani Herdsmen, across the country.

The former Speaker of the House of Representatives who spoke in Abia State during a one day working visit to the South-Eastern State, said that the Federal Government under President Mohammadu Buhari will establish grazing reserves and ranches only in the northern States of the country.

He stressed that no grazing reserve will be  established in the southeast or anywhere in the entire south.

His words: “I am a Fulani man from Sokoto, and I have cattles. I know that it is better for me to rear and keep my herds in one place and provide good grass for them.

“Talking about Southeast and northern Nigeria relationship this issue of herdsmen that has been coming up recently I believe Federal Government is coming up with a measured response of ensuring that we have grazing reserves, particularly, with emphasis, in northern Nigeria, in states where they originate from, so that they can remain within their neighborhood, within their families and carter for their castles in a much more better way, much more organized way and much more economically viable system.

“We in the northern states in particularly have embraced this very proactive measure of establishing grazing reserves in the north so that the herdsmen and their herds can remain at home in their environment. That will give us better meat, better milk and for the people of Sokoto and Aba leather for making shoes and other leather works.” Tambuwal said.

It will be recalled that the Abia State Governor, Dr Okezie Ikpeazu recently said that any plan to establish a grazing reserves for the Fulani herdsmen will be frustrated in the southeast because there are no land space in the zone for such.

Meanwhile, Governor Tambuwal who was in Abia to commission some projects executed by Governor Ikpeazu praised his Colleague for what he described as giant strides in the face of paucity of funds.

His words: “My dear brother, I can’t thank you enough for the recognition and honor of inviting me to come here to Abia State to commission projects executed by your administration.

“I must commend you for the giant strides in the midst of paucity and none availability of founds, you’ve been able to execute the projects that you found me worthy to come and commission.”

Governor Tambuwal, who said that he has had a long standing relationship with the good people of Abia State, commended Governor Ikpeazu for his leadership which he said has been able to sustain peaceful Abia State, while praying that peace shall never depart Abia State, even as it shall permeate the entity of the rest part of Nigeria.

His words: “Without peace we cannot have development and we cannot have progress. Let me therefore use the advantage of this platform to call on all Nigerians to continue to embrace peace and peaceful ways of conveying grievances that they have.

“Taking up arms against your state, or against your fellow brothers will not help matters it will rather worsen situations. I call on every Nigerian who is involved in any form of violence to please embrace peace and approach government at various levels on whatever grievance that anybody is having.

“I believe that all of us, from Mr. President down to council chairman as elected by the people, and we are here to listen to our people. Be rest assured that we up north are very much interested in what is happening around here and all over the country.” He said.

Speaking on the killing of a Christian woman from Imo State in Kano State, Governor Tambuwal said: “We are saddened by the development in Kano State, where one of our leaders and mother Mrs.  Bridget Agbaheme was murdered.

“I convey condolences of people of Sokoto State to her family, and all Nigerians.  I condemn the way and manner her life was taken unjustly. I said unjustly because she was never sentenced by any court of law. It was an act of a gang mob hiding under the guise of religion.

“As a Moslem from Sokoto State, I assure you that such act was unislamic. The religion of Islam is a religion of peace. Islam itself as a word means peace.

“We are also saddened by the attack meted against one young boy (Francis Emmanuel) by his stepmother in Kano State. We are not happy with these development.”

However, Umuojima Road has been renamed after a three time Deputy Governor of the State, Late Dr. Chima Nwafor.

The Late Dr Nwafor, a renowned surgeon, was first Deputy Governor to the First Civilian Governor of the State, Dr Ogbonnaya Onu from 1992 to 1993.

In 2003, Dr. Nwafor was elected as Deputy Governor to Kalu during the second tenure of Orji Kalu, but died he in office before the end of the tenure.