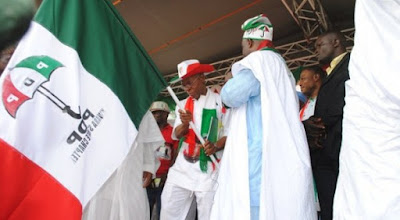 Youths under the aegis of Concerned Peoples Democratic Party Youths have threatened to take over the party if the leadership crisis is not resolved within one week.

The Chairman of the group, Mr. Aderemi Olufemi, said this at a press briefing at the PDP National Headquarters, Abuja, on Tuesday.

He said the party’s youths are deeply saddened by the unabated internal wrangling besetting the former ruling party.

According to him, youths have been patient with PDP stakeholders since the Port Harcourt convention to amicably resolve the lingering leadership problem in the party.

Olufemi explained that the youth took its decision at an emergency meeting after consulting widely with different groups, women and patriots in the party.

He said, “We are giving the leadership of the party (which includes the BOT, Governors’ Forum, warring groups and other stakeholders) a seven-day ultimatum to resolve this intractable but avoidable rancour.

“However, if this is not resolved, we shall be compelled to mobilise all concerned youths nationwide to take over the affairs of the party, as we have started putting in place an effective structure to take over the party secretariat.

“The PDP as a party is bigger than individuals and groups. Therefore, we will henceforth not tolerate anyone to take the party for a ride. We are therefore demanding the immediate withdrawal of all pending litigation in the court of law, so that we can amicably resolve all issues (that is what PDP is known for – dialogue).”

Members of the group noted that it was sad that leaders of the party did not consider the effect of their actions on the forthcoming governorship elections in Edo and Ondo states, which is likely to affect the fortune of the party.

He also announced that the youth group has constituted an 11-man committee to liaise with all the factions concerned and stakeholders so as a matter of urgency resolve all disagreements in our party.

Why I omitted Tinubu from my victory speech – Akeredolu