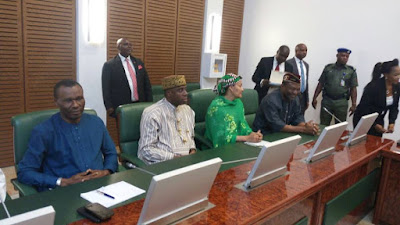 The minister of transport, Chibuike Amaechi, and the minister of state for petroleum, Ibeh Kachikwu, on Monday disagreed on the establishment of a Nigerian Maritime University, proposed for Okerenkoko in Delta State.

Speaking alongside other ministers at a government town meeting in Uyo, Akwa Ibom State, Mr. Amaechi defended the decision of the Buhari administration to scrap the project.
Mr. Amaechi said the previous administration of Goodluck Jonathan had paid too much to acquire a site for the university.
The groundbreaking of the proposed school at Okerenkoko in Warri south-West local government area was done by former President Goodluck Jonathan in 2014.
But addressing the senate committee on maritime on January 19, Mr. Amaechi announced the scrapping of the project, which was to be financed by the Nigerian Maritime and Safety Administration Agency, a parastatal under his ministry.
He cited insecurity in the area, and said the project was a “misplacement of priority” because there are transport institutes in Zaria (Kaduna), and Oron (Akwa Ibom), already.
On Monday, Mr. Amaechi address the case again, in response to a question at the town hall meeting.
The minister said the new government lacked the funds to continue with the university project.

“Okerenkoko (Maritime University), I am not against,” he said. “My argument about Okerenkoko is that land alone is 13 billion(naira). If you give me 13 billion, I will buy the half of Lagos. That 13 billion has built the university already.”
He said the Economic and Financial Crimes Commission should recover the N13 billion already paid for the land, then “I will build the university for them”.
“What to do: let EFCC retrieve the money and release the money and we build the university. If they bring the N13 billion, I will build the university for them. That’s for land alone. I believe the Federal Government does not have money. When we have money, we can continue. The minister of petroleum has said he would look for the money. Minister, give me the money and we continue.”
But Mr. Kachikwu disagreed with Mr. Amaechi, saying he was in support of the project, drawing a loud applause from the audience.
“First, let me say on Okerenkoko University, I disagree with the Minister of Transport,” he said.
“Any facility that is located in the South-South we should work close to developing it. I don’t care the circumstances under which you are placed.
“It’s not in my position to determine whether land was valued at 3 billion or 10 billion. The appropriate institution which is at the cost system will determine that. That has nothing to do with development of infrastructure. And as far as I know, so much has already gone into the university.
“So much physical of assets are being developed. We are not going to throw away the baby with bath water. We deal with the issues but the university will be developed. If he (Amaechi) does not want it in Maritime, I will take it in petroleum,” he said.
Mr. Kachikwu later said that he joined the present government without ever meeting President Muhammadu Buhari, but by “recommendation and reputation”.
On the renewed insurgency in the Niger Delta region, Mr. Kachikwu repeated his call for dialogue with Niger Delta Avengers which has vowed to ground Nigeria’s oil industry, having carried out audacious attacks on oil and gas installations.
He said the crisis could not be resolved through counter military attacks by Nigeria’s Armed Forces, but through dialogue.
“We must dialogue first; and if that fails, we know what to do next,” he said.
He said Niger Delta people with “skills and finance” would benefit from allocation of oil blocs because it would be part of “giving back to the chicken that laid the eggs”.
He said oil blocs would empower Niger Delta people and enable to engage in genuine oil deals, rather than being contractors to oil companies.

No Force Can STOP a Man Whose Time For Victory has...