Home Uncategorized Pastors of Assemblies Of God in the South-South Region Declares Loyalty to...
Spread the post 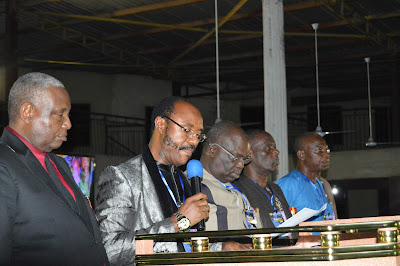 Despite the attempt by some hooligans sponsored by an Ex-communicated former General Superintendent of Assemblies Of God Nigeria,Pastors of the Church in Rivers,Bayelsa,Delta and Byaelsa States has declared absolute Loyalty to the General Council led by Rev Dr Chidi Okoroafor.

Their Stand was made known via a Communique issued at the end of the 2016 National Ministers Institute which held at the Pentecostal Theological Seminary,Akpajo,Eleme Rivers Nigeria by the committee headed by the Rivers District Superintendent Rev Dr Daddy D.S Ibulubo

ANALYSIS: FCT Council Poll: The battle for the soul of Nigeria’s...