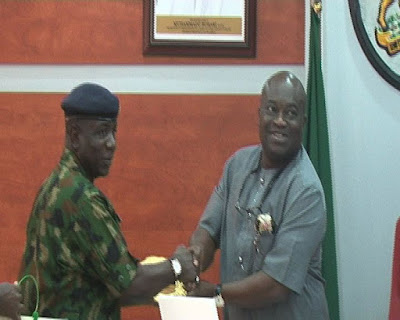 Abia State Governor, Dr Okezie Ikpeazu has advised the Federal Government to think of establishing farms across the 36 states, using members of the National Youth Service Corp (NYSC) as drivers of a youth agricultural  initiative.

The Governor said this when he received the Director General of NYSC, Brig. Gen. Sule Zakari, who paid him a one day working visit at Government House Umuahia.

Governor Ikpeazu said the policy will make it mandatory for Corp members to be trained by experts in various aspects of agriculture during their one year national service, and every state will provide farm.

He added that upon the completion of their service year, the Federal Government will make Agric loans accessible to them to go into various aspect of farming.

He said that the scheme will provide employment as it will encourage youth involvement in agriculture and reduce the number of white collar job seekers.

His words: “I’ve thought about how to solve the problem of unemployment in Nigeria and I think that the best way to solving this problem from the cradle is make use of the NYSC scheme. 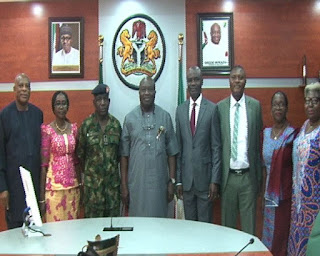 “Upon completion of their training, after the service year, the Federal Government will make Agric loans accessible to them to go into various aspects of farming.

“This will create automatic employment as well as encourage youth involvement in agriculture thereby reducing the number of white collar job seekers. “

Governor Ikpeazu said that the NYSC members posted to Abia State will be given the opportunity to try their hands in the multidisciplinary skills acquisition centers established by his administration to equip youths to become independent in various trades like carpentry, building, fashion design, ICT, hair dressing etc.
According to him, “NYSC is a vehicle that can drive government policies including agriculture and achieve good value chain in the industry”.

He promised that the erosion site at the orientation camp will be visited and the female hostel looked into, promising that government will continue to assist the NYSC in the state.

He also pleaded with NYSC to consider awarding contracts for the production of uniforms and boots to Aba tailors and shoe makers to support his administrations drive for patronage of made in Aba goods and services.

He assured that the state Government will guarantee high quality products as well as provide industrial capacity machines and high quality inputs to a consortium of tailors and shoe makers at Aba to meet the demands of NYSC in a timely manner. He stated that the state is also ready to supply uniforms and boots to military men in the country at competitive prices.

Earlier, the DG of the NYSC, brig Gen Suleiman Zakari Kazaure said that he was in the state for a routine inspection of the camp facility for the batchA stream 2 of the NYSC.
He thanked the Governor for the cordial relationship between the state and the NYSC team in the state and appreciated his achievements in the state including his benevolence to the NYSC and requested him to assist in the area of erosion control in the camp, fix the dilapidated female hostel and provide borehole as well as do something about the subvention payable to NYSC.

We told Buhari not to rush back to Nigeria – Ortom