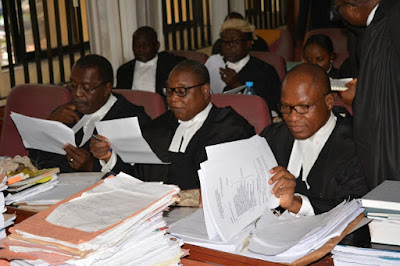 The Peoples Democratic Party, PDP,  on Thursday  declared that Former Acting National Chairman of the party, Senator Ali Modu Sheriff  was validly removed by the legally constituted  May 21, 2016 National  Convention  of the party which held in Port Harcourt .

The PDP  further declared that the  Caretaker Committee  of the party headed by Senator  Ahmed Makarfi was duly appointed  in line with the  Constitution  of  the  party.

The party stated that the National  Convention  was convened by the National Executive Committee headed by  the  former National Acting Chairman,  Senator Modu Sheriff,  who himself  participated in pre-convention events including  his participation  in the screening  exercise.

Making the  submission  on behalf of the PDP at the Federal  High Court in Port Harcourt presided over by Justice  Abdullahi  Liman, counsel  to the  PDP, Oladejo  Laminkanra (SAN) in an originating  summons stated that: “Modu Sheriff  submitted himself  for screening at the Port Harcourt National Convention.  Realising that he has lost his bid to be national chairman, Modu Sheriff  alone without consent and consultations with the  National Executive Committee  claimed he postponed the convention. Modu Sheriff  had no such powers to postpone a convention approved by the National Executive Committee. “

Submitting  further, the PDP averred that: “Modu Sheriff  is not the chairman  of  PDP.  He was never elected at any convention and he is subject to the extant judgment of AB Mohammed J (FCT High Court, which Modu Sheriff is curiously  seeking  to  enforce.

The PDP  argued that no court stopped the party from holding its national convention.  It added that the National Constitution  of  the  PDP  was also never suspended, hence the National  Convention derived its powers from the party’s  constitution.

The party  stated that the interim order of the Federal  High Court sitting in Port Harcourt  stopping  Modu  Sheriff from parading himself  as PDP  Chairman  was still subsisting.

“An interim order met with  the applications  mentioned  does not lapse until 14 days after arguments are taken. That is 14 days from May 16, 2016”.

He noted that the suit was filed by the PDP  and not Senator  Ahmed Makarfi  and Senator Ben Obi  as claimed by the Former  Acting  National Chairman of the party.

The Former Acting  National Chairman through  his counsel, Ajibola Oluyode filed applications  asking the court to set aside the interim order directing  him to stop parading himself  as Acting National  Chairman.

The former  acting national  chairman  also urged the court to strike the name PDP  from the suit  and subsequently  strike it out.

Justice Abdullahi Liman  adjourned  the  matter to July 4, 2016 for judgment.

My attacks on Buhari, APC, not personal – Fani-Kayode