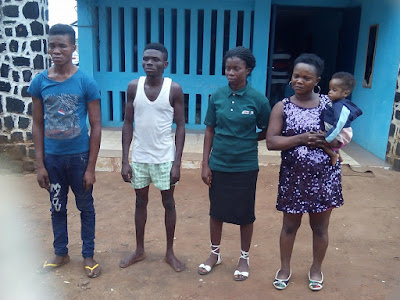 Parading the suspects, the police Public Relations Officer (PPRO), Andrew Enwerem said that little Miss Okeke was stolen by a 20 year old Chibueze Okorie in connection with Chinonso Ogbedi, Ijeoma Ogbuehi, an acclaimed Evangelist and Joy Nwosu all of Orsu local government whose plan was to sell the child.
The police spokesperson disclosed that the abducted child was rescued following information from the members of the public on the whereabouts of the suspected human traffickers. “on Friday, we received distress calls that one Chinasa Okeke was stolen from her school, we swung into ation immediately where we rescued the child unhurt and arrested these four miscreants in the process who have all confessed to the crime”.the PPRO informed

Confirmng the incident, the prime suspect, Okorie said that Miss Ogbuehi asked him to abduct the little child, promising to reward him with two hundred thousand Naira (N200,000) when she gets a buyer but unfortunately for him, she never got to pay him as at the time of their arrest.
For Ogbedi, Nwosu’s boyfriend, the child was sold in Ihiala, Anambra State for an amount he refused to disclose
Ogbuehi, a graduate of Trinity College of Ministerial Acts,Aba in Abia state denied promising to give Okorie N200,000 as he alleged, even as she claimed to be legally qualified to adopt less privileged children, even as she failed to show any certificate to back her claim.
The rescued child has since been reunited with her parents as her father, Mr Matthew Okeke expressed gratitude to the Nigerian Police Force for saving his daughter’s life.
Mr Enwerem said that the suspects would soon be charged to court for child stealing and trafficking