Home Uncategorized Those who stole for 16 years will suffer prosecution for 16 years...
Spread the post 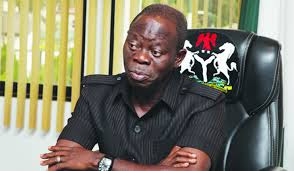 Edo State governor, Adams Oshiomhole has reacted to criticism labeling President Muhammadu Buhari as performing poorly, adding that the president is already delivering on his electoral promises and the APC Change agenda.

Oshiomhole, who was speaking at the national executive committee meeting of the Nigerian Bar Association, NBA, said, “I know that right now, everybody is talking in the country.

“You have to check whether the foundations are weak so that you remove them. You must first do a lot of cleansing and excavation.

“That is what President Muhammadu Buhari is doing. And people expect that in 12 months you would have fixed what was destroyed in 16 years.

“It is simply not possible and in any case, you must also recognize that even the pressure on the naira is the result of the so much dollars that was taken out and it will require a lot of efforts at a time of collapsed prices and the challenge of oil export to fix what was completely mismanaged.

“So, I ask us as elite, we have a duty to explain to the Nigerian people: Changes will come, but they won’t come by trying to remove a house with smoke under.

“You must extinguish the fire and make sure the foundations are strong, and start the process of rebuilding gradually.

“The challenge of re-fixing the house that has been destroyed is much more cumbersome.”

The governor, however, called on the NBA to join hands with the government in the fight against corruption.

He added, “The NBA has a very important role to play in the national effort to combat and defeat corruption. But I asked my Lord the Chief Judge, by the time the President of the NBA said the Bar has been fighting the war, and I said to my lord, are you aware of any casualty in the war the NBA has been fighting against corruption? Is it possible to fight a war without casualties?

“I think now we are beginning to see casualties because there is a renewed determination by the federal government under the able leadership of President Muhammadu Buhari to demonstrate that if it is true that corruption is as rampant as everybody claims, and if it is true that we have set up institutions to fight it, it cannot also be true that we are fighting and nobody is falling.

“I think right now people are beginning to fall, and with your help, they can fall faster. Corruption is fighting back and I regret to have to say this in your presence, I should say this after you have left, that it appears that corruption is fighting back, and a section of the Bar is supporting this effort, because we have seen needless adjournments, needless amendments to charges and needless preliminary objections, leading to endless adjournments.

“I think that the Bar in your business section agrees on a code that if as Buhari said, if we don’t kill corruption, it will kill us, and we don’t want to die, then we must allow justice to have its way without delaying it.”

Oshiomhole said criticisms of the anti-graft war being one-sided should be ignored, adding that its all handiwork of detractors.

”Is it the victims of the sharing that should be prosecuted? You dominated power for sixteen years, you have operated in the name of Boko Haram and you spent the money and shared the money.

”Who else should be prosecuted? So, I think the Bar needs to be bold in dismissing those who are seeking to trivialize the anti-corruption war. Just now, we are beginning to see all kinds of groups coming up under the guise of one protest or the other. They want to harass and intimidate the system.”

Senate Leadership: I Had My Opportnunity And Took It –Ekweremadu

Viewers Discretion Advised: Victims of The Military Invasion at The Bori...