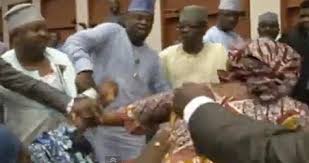 There was chaos on Monday on Mojeed Sanni Street, in the Igando area of Lagos State, after a 40-year-old Hausa trader, Ibrahim Adamu, allegedly killed a bus driver, Lekan Adeleke.

Some residents and friends of the victim made a bonfire on the road as they chased away Hausa traders in the community, threatening to avenge the killing.
The men were on the rampage when policemen from the Igando division, led by the Divisional Police Officer, Olatunji Ajimuda, stormed the area.
The police team reportedly took Adeleke’s corpse to a mortuary, while the suspect, who was saved from being mobbed to death, was taken to the Area M command.
PUNCH Metro gathered that the deceased had bought noodles worth N230 from the suspect’s son on Sunday around 10.30pm.
He was reported to have paid N200 and promised to pay the balance of N30 the following day, which didn’t go down well with the suspect’s son.
The son allegedly reported to his father, Adamu, who became angry and attacked 30-year-old Adeleke with a spiked plank.
The victim reportedly slumped and hit his head against the concrete edge of a gutter in the area.
A friend of the victim, Kehinde Akinduro, said Adamu had a kiosk where he sold confectioneries, while the son sold noodles beside the kiosk.
He explained that Adeleke had actually paid the balance of N30 to the suspect’s son.
He said, “He was joking with the boy that despite being a customer, he went and reported him to his father. They started abusing each other. At this time, the son was already preparing noodles for me on the instruction of Adeleke.
“The next thing I saw was that Adamu, who was eavesdropping, brought out a spiked plank and hit Adeleke with it. I cautioned him, but he faced me and hit  me in the leg. I sustained some injuries.
“When Adeleke saw that he could no longer handle the situation, he took to his heels. But the man followed him and hit him in the head as he tried to jump the gutter. He fell and hit his head against the edge of the gutter.
“When Adamu saw that he had become unconscious, he took him into his kiosk and poured water on his head. He was doing this when a large number of residents stormed the place.  When he sighted them, he abandoned the man and took to his heels.”
He said the suspect, speaking in Hausa, asked his son to flee in another direction.
“The boy escaped, but we were able to get Adamu. We called the police and handed him over to them,” he added.
The mob was said to have destroyed Adamu’s kiosk and set it on fire after Adeleke died around 12am on Monday.
PUNCH Metro learnt that the victim and the suspect had a close relationship.
One of Adeleke’s close friends, Tunde, said the victim once protected Adamu from a robbery attack.
“But Adamu is ill-tempered,” he added.
Tunde appealed for support for Adeleke’s family members, whom he said depended solely on him.
Our correspondent was told that the victim had recently bought a piece of land in Ogun State where he planned to build a house for his wife and nine-year-old daughter.
A bus driver, who did not want to be identified, said the policemen from the Igando division handled the situation maturely.
“The DPO spoke with the protesters. He released N15,000 for the corpse to be deposited in a morgue,” he added.
A source said a mob invaded the Igando Police Station in a bid to lynch the suspect.
He said the DPO quickly transferred the suspect to the Area M Command.
The Police Public Relations Officer, SP Dolapo Badmos, said investigations were ongoing.
She said, “It was a case of murder. One Adamu used a plank to hit a bus driver, Adeleke, in the head which led to his death. The corpse was deposited in the Mainland General Hospital morgue for autopsy.
“Meanwhile, we have intensified patrol in the area as normalcy has been restored.”
Source:punch