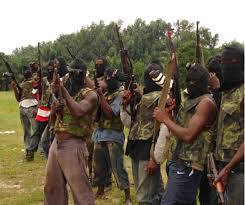 Former militants in the Niger Delta region have called on the Federal Government and the Niger Delta Development Commission to carry them along if they were serious about developing the region.

The former militants, who made the call in Port Harcourt on Wednesday when they met with the leaders of the Niger Delta Peace Campaign for Development Network, said it was necessary for government to involve them in the growth of the area.
One of the ex-agitators, Mr. Abiodun Edah, formerly known as ‘General’ Abiodun, stressed that youths and community leaders in Niger Delta must be part of the development of the region.
“The idea of giving peace a chance is a welcome development. But I believe that if the Federal Government and NDDC are serious about developing the region, they must involve us.
“Apart from the ex-agitators, youths and community leaders must be carried along if we are to achieve peace in the region. When the former President, Goodluck Jonathan, was there, he partnered with us to watch over waterways and other surveillance contracts,” he said.
Also, a former militant, Tommy Dore, urged the NDDC to ensure that everybody benefitted from their empowerment programmes.
Dore said, “We are in support of any peace move in Niger Delta. If the President (Muhammadu Buhari) is visiting the region, all leaders, including the community leaders, should be invited.
“The NDDC should allow everybody to benefit from any empowerment programme such as skills acquisition, scholarship and the rest of them. The issue of filling these positions and opportunities with the names of their family members and relatives should stop because there is the need to reposition the NDDC.”
Source: punch

Buhari not confined to a chair, says governor