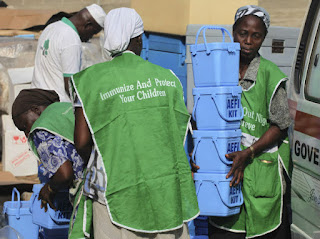 some communities in jos north local government of plateau state, have refused to participate in the on-going immunization exercise which began on jan. 28. the immunization exercise is against polio.
?the communities have shunned entreaties by the immunization officers; they say the vaccine should be replaced with food,? mrs hannatu davat, the local immunization officer, told newsmen in jos on monday.
davat explained that the parents, who rejected the vaccine, asked the government to rather work toward slashing the prices of food items.
she said that other residents, who refused to participate, claimed that they had collected too many rounds of the vaccination, while others described the vaccines as ??western medicine?.
the officer further said that even doctors rejected the vaccines on the grounds that government was paying too much attention to polio while neglecting other serious diseases.
?the local government has reported the development to the plateau chapter of the nigeria medical association (nma), who have promised to ensure that no doctor rejects any polio vaccines meant for children.
?one of the doctors mentioned mumps as one of the diseases being neglected, and described it as a serious disease which government hardly worry about.?
davat said that the local government had set up a social mobilization team that was moving through affected communities to sensitive them on the importance of taking the vaccines.
?based on such efforts, some of the communities have changed their initial stance and are ready to bring their children, but others have remained adamant,? she said.
the officer, who refused to name the specific communities, however, revealed that three wards were involved.
?we have seven rounds of immunisation this year and this is just the first round; if we are not able to resolve the lingering issues, we shall forward them to the state office for further action,? davat said.

Wike condemns blowing up of pipelines by...