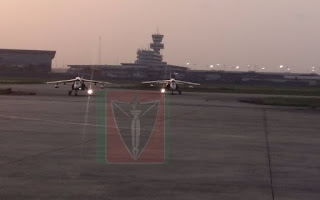 The Nigerian Air Force’ (NAF) contingent to The Gambia yesterday disclosed that ousted ruler Yayha Jammeh was ready for war but for the intimidating air power deployed by the subregion.
Leader of the contingent, Air Commodore Tajudeen Yusuf stated this in Lagos after the arrival of 77 airmen and 20 officers, who were among the over 200 personnel sent to country to deploy force and install the  country’s democratically elected President Adama Barrow.
With the different NAF air lifts and aircrafts flying over, as well as that of other countries, The Gambian military were said to have downed their weapons for fear of retribution, given the small strength of their military power.
They arrived in NAF 918 C-130 aircraft and two Alpha Jets at about 6:18pm and landed the 203 NAF Airlift Group.
According to Yusuf, what they saw at the state house in The Gambia and Jammeh’s country home showed he was ready to die and even cause the death of innocent people.
The contingent was received by the Chief of Policy and Plans, Air Vice Marshal James Gbum, on behalf of the Chief of Air Staff (CAS) Air Marshal Sadiq Abubakar.
Yusuf said: “We conducted the operation with deterrence and diplomacy. When we gained access to the state house, from what we saw, Jammeh was prepared for war.
“But for the airpower that we showed, as we were the first country to show up at The Gambia, he would not have stepped down.
“For now, we have won the battle but it’s left for the political leaders to win the peace and stabilise the country. The forces we left there are to basically stabilise The Gambia and integrate their forces in the security arrangement.
“They will continue to be there until stability is achieved and the ECOWAS leaders decide that all security forces of other nations stand down.”
Asked if any casualty was recorded, Yusuf said no, adding that they have advised Barrow on how to sustain the peace and stability achieved in The Gambia.
While receiving the contingent Abubakar said the NAF would have applied force if Jammeh hadn’t opted to back down, adding that they were prepared for it.
He stated that the troops left behind would remain there to ensure stability, adding that others would arrive today.
He said: “Prior to your departure, the CAS addressed and emplored you to represent Nigeria well. Thus, the discipline and professional conduct you all maintained was highly commendable and worthy of mention.
“Also, your cooperation with sister services and other military forces of other ECOWAS countries is also commendable. We are glad that democratic order has been maintained in The Gambia and stability achieved through your efforts. You have proven to be good ambassadors of NAF and made Nigeria proud.
“Note that the ability of NAF to provide Airpower at home and project same seamlessly in other countries is an achievement buoyed by the support of President Muhammadu Buhari.
“Yes, we would have applied force to restore peace. We went with our fighting forces.”
Source: the nation