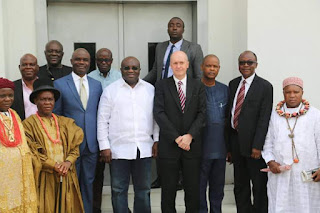 Abia State Governor  Dr Okezie Ikpeazu has met with managment of Total E &P Nigeria Ltd over the lingering issues of none-remittances of revenue to the state by the multinational oil firm, and total neglect of the oil-bearing communities in Ukwa West LGA of the state, where the company is currently engaged in an oil exploration activities. 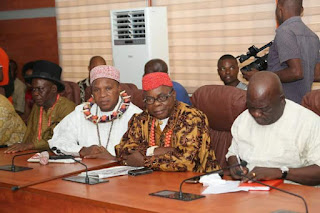 The meeting followed complaints by the state and the oil rich communities of Owaza and Asa in Ukwa West LGA of the state which prompted a recent tour of oil facilities in the area by Governor Ikpeazu, with a promise to resolve the lingering issues with Total E&P Nigeria Ltd.

“We commend the Governor for visiting our stations in Owaza, and also for calling us to this meeting for Community engagement. I appeal to the community not to prevent or stop us from working in the community.” Le-Cock said.

Stressing the need for peaceful coexistence of the state, community and the oil company, Governor Ikpeazu thanked the traditional rulers and people of Ukwa West LGA, especially the youths for the mature way they have conducted themselves in a peaceful dialogue instead of engaging in destruction of oil facilities in their communities despite the obvious neglect by the oil firms.

“The misunderstanding between Total and Oil bearing communities was due to lack of clear cut communication between the oil company and the communities that have been shortchanged by the oil companies since there is nothing to show in terms of human capital development, infrastructure and job opportunities.

“The Oil bearing communities are worried that they do not know what their rights are as they are not aware of of what the environmental impact assessment specifies, even as they are not carried along in the company’s policies.

“As a state, we are not happy that you’re operating in our state and yet you don’t pay  tax to us. You don’t employ our people. It’s now time for the Total and other companies operating in the state should establish a community Relations officer in communities and state to make for greater symbiosis between the company, the locals and the state.” The Governor said.

Speaking on behalf of the Oil-bearing community, the former Abia Commissioner in the board of NDDC and ASOPADEC chairman, Chief  Sam Nwogu, thanked the Governor for his initiative and expressed the readiness of the Oil community to provide Total with the enabling environment to continue to carry out its operations.