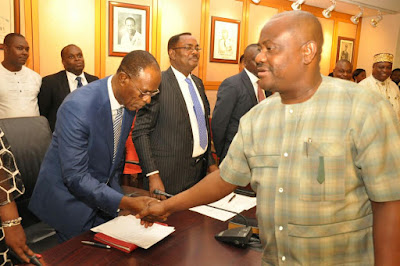 Rivers State Governor, Nyesom Ezenwo Wike has  declared that his administration  will fully revive the state’s  secondary  health sector  as it works towards creating access to quality  healthcare for the people.

Governor Wike also stated that the  process of reforming the state’s pension platform would be entrenched to make life more  meaningful  for retired civil servants.

He spoke on Thursday  at the Government House, Port Harcourt while inaugurating  the Chairmen and members  of the Rivers State Hospitals Management Board and the Rivers State Pension Board.

The governor  said that the constitution  of the Rivers State Hospitals Management Board is long overdue, pointing out that the new board will support the administration  in its drive to reposition the hospitals in the state.

He added that the facilities at the Braithwaite Memorial Hospital would be  improved, while the rehabilitation  of General Hospitals  across the state  will be intensified.

On the Rivers State Pension Board, Governor Wike  said that the new board would liaise with the Office of the Head of Service  to carry out the pension  reforms planned by the administration.

He said: “We really have to radically  improve pension management in the state, so that our retired civil servants  live better lives after serving the state.

“I am behind these two boards as long as they take the right steps. These boards must be courageous.  They must work hard for the state to achieve her developmental goals “, he said.

Responding on  behalf of the boards, Chairman of the Rivers State Hospital Management Board, Dr Silas Eneyo assured the governor  that the boards will address the challenges  for which they have been established

We will commission several roads before May 29...