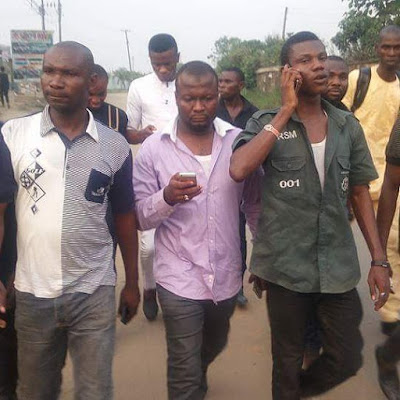 THE Vice-Chancellor of the University of Port Harcourt, Prof. Ndowa Lale,yesterday ordered the arrest and shooting of some Top Executives of the National Association Of Nigerian Students(NANS) Zone B.

Students of the University of Port Harcourt protested against the university management yesterday by shutting down the Choba axis of the East-West road.
Security operatives responded to the protest with live bullets, as directed by the Vice Chancellor. And also arrested some student leaders of the protest, including Pedro Chibuzo Obi who happens to be the NANS Coordinator for South-East & South-South (SESS).The rumor about the casualties is yet to be confirmed. It was also gathered that  they are planning a mega protest for today. The students want their VC sacked, some new policies reversed and some other senate decisions abolished.
Remember, sometime last year, students of the same institution protested against the university management over a change of policy. Security operatives responded to the protest by shooting and killing a student during the protest. Students got angry over the death of their own and decided to attack the university infrastructure in an unprecedented manner, burning down buildings, loooting computers and destroying critical infrastructures. The university was shut down for months. The university is yet to recover from that damage. The university vice chancellor was suspended from office by the university senate but was later res instated.
This recent protest is connected to the previous event of last year.

The university is saying it can no longer run the university system based on old policies. It needs funds. Students must pay their fees on time or lose a session. As a matter of fact, the university is finding it difficult to even sustain its newly installed independent gas powered plant. As at three years ago, the university NEPA bill for a month was between six to ten million Naira. The university also spends a similar amount on diesel monthly to augment the poor NEPA supply. If you do not give students power for a whole night, they would shut down the university the next day.

Students believed the university management is criminal and corrupt. They believe university education should even be free. They want an old policy that allows them accumulate and owe the university fees till graduation retained. This is the cause of the crisis. The university says it must restructure its policies and make some changes. Students cannot afford these changes.

To make matters worse, the Senate of the university recently expelled about two dozen student leaders who are in their final year. They were the student leaders that organized the previous protest that led to the suspension of the VC and the death of a student. This is precisely the cause of yesterday’s protest. The students want their faculty presidents (expelled students) back to school and the VC sacked for supporting such a decision in the first place.