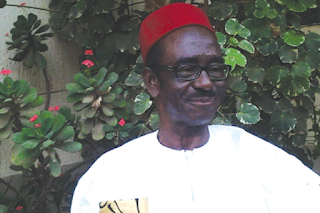 Prof Elochukwu Amucheazi is both a member of the Igbo Leaders of Thought, ILT, and Ohanaeze Ndigbo.

In this interview, Amucheazi who is the National Secretary of ILT spoke about Igbo leadership, lip service to fight against corruption: true federalism and restructuring as well as the problems within the South East Governors’ Forum, SEGF, and efforts to reconcile them.

He also, said that Ndigbo would never regret rejecting President Muhammadu Buhari during the 2015 election, and would vote for Jonathan again en-masse if he stands for another election tomorrow.
What have you been doing after MAMMSER?
After MAMMSER, I became the Director General, National Orientation Agency, NOA, from 1993 to 2011. Since then I have been involved in one thing or the other. In fact I just ended as the pro-Chancellor, Anambra State University; before then I was the Chairman Anambra Broadcasting Service before I became the pro-chancellor of the university now called Chukwuemeka Odumegwu Ojukwu University. So I am still in the arena, so to say.
What about politics?
Well, everybody is a politician but I am not vying for political power.
What is the major difference between the Ohanaeze Ndigbo and Igbo Leaders of Thought?
Ohanaeze is the apex socio-cultural organization of Ndigbo whereas Igbo leaders of Thought is a collection of, call it, intellectuals who are concerned about the welfare of Ndigbo. It is a think tank, generating ideas, interacting with all other Igbo organizations; selling those ideas; in other words mobilizing our people for the welfare of Ndigbo.
But the Aka Ikenga claims to be the intellectual arm of Ohanaeze?
I am not aware of that kind of claim; I am not sure any organization can claim that. I am in Ohanaeze and the current constitution of Ohanaeze was drawn up by my committee, I was the chairman. So I am not aware. Is Aka Ikenga not located in Lagos? But I think it is just one of the organizations. You have to appreciate the political culture of Ndigbo; we are an egalitarian society and individuals are bubbling with enthusiasm to contribute and so they can come round, form organizations and explore how they can make their own contributions. So we have Aka Ikenga, we have Nkpoko Igbo, we have Ala-Igbo Development Foundation, we have the World Igbo Summit Group and so many other organizations and no one can claim any particular/ special relationship with Ohanaeze. Ohanaeze is just the umbrella organization of Ndigbo. We call it socio-cultural, not necessarily political.
Does it have anything to do with the saying that Igbo have no leaders?
Who said Igbo have no leaders? No, no, no! The common saying is Igbo don’t have kings but I think it is probably taking it literally not that we don’t have leaders. There is no community that doesn’t have a leader or leaders, starting from your primary community.
The former Vice President, Dr Alex Ekwueme is a foremost Igbo leader who is now over 84 years. The problem is that we don’t have those who will take over from people like him or Prof Ben Nwabueze among others
Ekwueme is an Igbo leader, very prominent, an intellectual and everything that you need in defining Igbo leader you have in Ekwueme and therefore he is a foremost Igbo leader, at least till today but we have others coming up as well. We have Nwabueze, Ebitu Ukaiwe, Ndubuisi Kanu and a good number of others. I think that what confuses people is the dominance, politically, of young traders in government; compradors in government; people reared by erstwhile military dictators, who managed to have cornered a lot of money and they are everywhere in Igbo land. At the moment they seem to be at the helm of affairs because they are governors, they are these, they are that.
But they are not necessarily the Igbo leaders. In every community there are leaders, at the moment the impression is about these people who are in government, who control tools of government but it is not always the case. They throw their weight about because of the way things are in this country but it is not that Igbo do not have leaders. You see, at critical moments, Igbo leaders emerge. In the 1950s you saw how Dr Michael Okpara emerged. During the civil war you saw how Emeka Ojukwu emerged. They were in the forefront, but not that Ojukwu or Okpara were the only leaders. There is this collective leadership that is associated with Ndigbo.