Home Uncategorized Herdsmen Gets 1,200 Hectre Of Ranch For Cattle Grazing,Slaughtering In Bayelsa
Spread the post 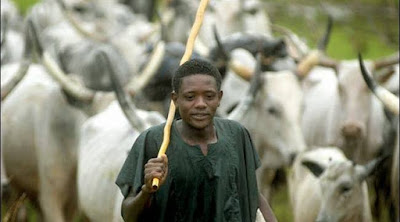 The Bayelsa State Government has donated 1,200 hectares of land to cattle rearers, popularly known as Fulani herdsmen, for grazing, ranching and slaughtering of their cattle in the state.

The state government had announced the restriction of the activities of herdsmen in the state to the Bayelsa Palm area in Yenagoa, the state capital, saying its decision was to prevent the invasion of farmlands and check any security breaches.
Governor Seriake Dickson, who reportedly issued the restriction order, had said the measure had become imperative in view of the recent upsurge in violence and criminal activities of some cattle rearers in some parts of Nigeria.
He had also warned cattle rearers against bearing arms in the course of grazing their livestock, threatening that anyone caught with weapons would be dealt with in accordance with the law.
The State Chairman, Cattle Ranches Management and Control Committee, Mr. Shitu Mohammed, said at a news conference in Yenagoa on Saturday that the 1,200 hectares of land was for ranching, grazing and slaughtering of cattle.
During the interactive session which comprised stakeholders such as the herdsmen, butchers, farmers and security agencies, Mohammed said more ranches would be donated to the cattle rearers in the state.
Mohammed, who commended Governor Dickson and the Bayelsa State Government for releasing the land, said the gesture would help to sustain the lasting peace that had existed between herdsmen and farmers in the state.
He noted that the committee was set up by the state government to foster cordial relationship between cattle rearers, farmers and the people of Bayelsa State.
Mohammed further noted that there were no cases of rape and killings by the herdsmen in Bayelsa, rationalising that the committee in collaboration with the state government and security agencies had put in place quick response mechanisms.
He called on Bayelsans to see the provision of the ranch by the state government as a welcome development, saying that the development would create job opportunities for the people and enhance tourism development.

Reacting to the Development,a Human Rights Activist/Social Commentator Aluzu Ebikebuna Augustine said despite the warning,the Bayelsa State Governor has choosen to sacrifice its citizens without recourse

His Full Reaction is Below:

“Cattle rearing is a private business, I see no real revenue this venture will generate for the state.
Is the Governor trying yo impress anybody by this gesture?

I have said it before, the danger is in the long run. We understand the CBN shared money for this. Bayelsa  was part of the states that shared the 100 billion naira by CBN for creation of grazing land across the country.

In a time were the country is looking for alternative, the Governor cannot boost our IGR with what we already have. What happened to Bayelsa palm and Restoration rice?

If this is about securing relative peace in the state, then the governor has got it all wrong. When herdsmen thought they were taller than the Law, it took the ingenuity of the Ekiti House of Assembly to unearth their emptiness. When armed herdsmen killed, kidnapped and destroyed farms in the western zone, particularly Ondo, Ogun, Oyo, even Lagos, with very little done to deter them, Governor Ayo Fayose rose to the occasion. He created a law with the aid of Ekiti state House of Assembly against unauthorised grazing and established a task force to implement it. It became so effective that the Fulani Minyetti Allah Cattle Breeders Association,MACBAN, sent a delegation to him.

Matters were talked over, and both sides took groups photographs to celebrate a negotiated settlement. How many other states has MACBAN responded to in this dignifying and esteemed way? This governor did not donate land to herdsmen, or tried to please anyone in authority.

Soon, these herdsmen will settle their and claim the Land that they either paid for it or that it was a abandoned land, whichever way we want to disabuse our minds that it won’t get to that, I am foreseeing a very dangerous engagements between host communities and these herdsmen in the offine. We can’t afford to have clash with herdsmen over our state’s asset. What Bayelsa state needs is a Law”.

10 Shameful Things Guys Do When They Mistakenly Impregnate Their Girlfriends