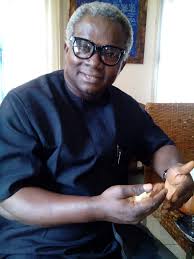 Director General of the Voice of Nigeria, and APC chieftain, Mr. Osita Okechukwu, in this interview with IHUOMA CHIEDOZIE, says former President Olusegun Obasanjo is not sincere with his call for an Igbo president in 2019

Man slumps and dies while arguing with friend